Now that the 2022 summer fishing season off Isla Cedros is in full swing, it seems that every week a different species of popular gamefish ends up in the spotlight. But whether it be big yellowtail, hefty halibut, or even a prized golden dorado, the waters surrounding the Island continue to deliver a vast array of world-class angling opportunities for the visitors who have been fortunate enough to be able to fish in such a bountiful and pristine environment. 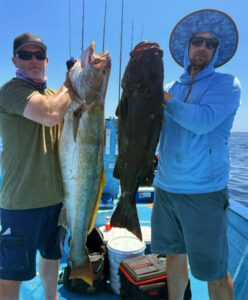 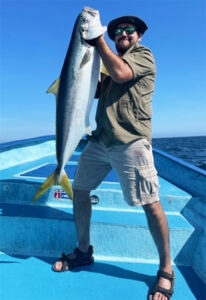 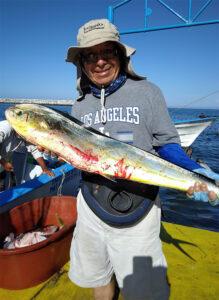 This week big white seabass stole the show, which was topped off by a huge 59-pounder that inspired hoots and cheers from all of the fishermen aboard when it was pulled over the rail of the panga. Shortly before it was landed, a chunky 40-pound black sea bass had just been laid out on the deck.  Similar in name, but genetically unrelated, these two fish alone held the promise of providing those lucky anglers with gourmet table fare for some time to come.

In this case, however, it was likely that both skilled experience and good fortune worked together to result in such a magnificent catch since, for most members of the party, it was their 5th visit to Cedros Island.

Kevin Roach, who caught the 59-pound white seabass, was accompanied by Brad Rosta, Andy Hernandez, Esvin Hernandez, and his dad, Jorge.  Esvin is a seasoned Cedros angler who, on a previous trip to the Island, managed to hook and land a big white seabass weighing over 40-pounds while casting a lure from the beach early one evening a couple of years ago.

Roach commented, “It was another awesome trip fishing at Cedros Island again. We caught a lot of fish, including big yellowtail, white seabass, and even one fat black sea bass. Most of our time was spent on the south end of the island. That is where I pulled in the huge 59-pound white seabass. It was caught on a black and chrome Megabait while I was yo-yoing it just off the bottom in about 50 feet of water.”

He concluded by saying, “Esvin’s dad, Jorge, got into the action shortly after we arrived on our first day by catching a nice dorado that afternoon.” 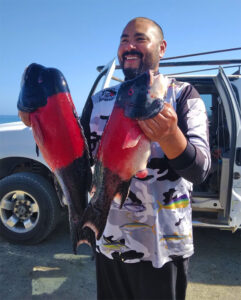 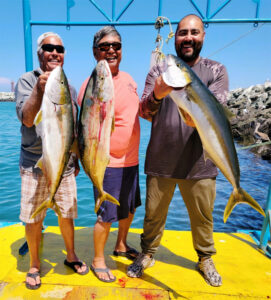 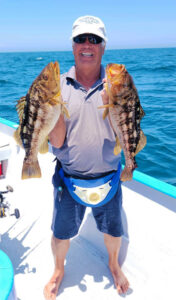 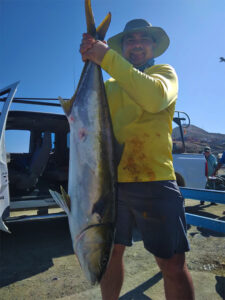 George Oliveira, the owner of Oliveira Pools, flew into Cedros with 11 other anglers in his party, most of whom were first-time visitors. They were delighted to encounter limit-style yellowtail fishing as well as a good bite on the local halibut, and even a few California sheephead and chunky calico bass.

Oliveira reports, “The dirty dozen arrived on August 12th and were even able to fish that afternoon after we arrived. The yellowtail bite was wide open. We were catching fish between 25 and 30 pounds, along with a few calico bass mixed in. The weather was great and we all hit our limits.

On another day, we fished for big calico bass most of the day and also took a good number of sheephead and ocean whitefish. On our last day, we were even able to fish for a few hours before departing and ended up catching even more quality grade yellowtail.

He wrapped things up by saying, “Our accommodations were very comfortable, the food was great, and the staff was super nice!” 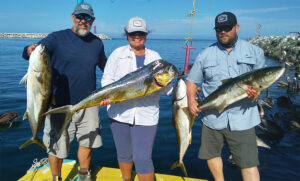 In addition to the fantastic fishing that is available around Cedros Island, one of the most gratifying aspects of the experience here revolves around attention to detail in making sure that our guests enjoy their stay in every way possible.

That is why it is always rewarding to get feedback such as what we received from one of our recent guests, Karl Fischer, who came to Cedros for the first time with his wife, Dima Firestine, and his brother, Gary Fischer. The trio was also responsible for catching our very first dorado for the 2022 season.

Fischer wrote, “The people, the scenery, the lodge, the weather, and the diversity of fish and wildlife everywhere it’s just jaw-dropping. It wasn’t just the best fishing of our lives, it was also the best adventure we ever had. We were extremely well taken care of and loved every moment of our trip.

I am humbled beyond my imagination, and will never forget the smiles of the people who worked so hard for us and managed to successfully put all of this together. We came for the fishing but left with so much more than that.”

And that pretty much sums up how most people feel after having spent several days on Cedros Island. People come for the fish, but they leave with far more than their catch; they also take a treasure trove of happy memories home with them.