The weather is pleasantly warm on Isla Cedros, but the fishing action in the waters surrounding the Island is red hot, and seems to get even better with each passing week.

Visiting anglers have been hooking up with limits of big yellowtail, bruiser white seabass, fat halibut, and even an occasional black sea bass that can often weigh in at between 100 and 200 pounds. 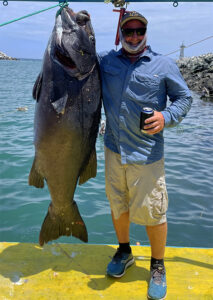 Longtime client, Dave Henderson, was one of the anglers who were lucky enough to hook up with one of these mighty beasts, and at a moment when he least expected it.

Henderson explains, “It was a trip of a lifetime! This is why I love this place; you just never know what you’re going to catch.

Our boat was fishing for Calico Bass when that huge black sea bass inhaled my red crab Hook-up Bait, and it wasn’t long before I started to see my spool running out of line as it burned off the reel  I have to say, I wouldn’t have been able to bring this fish in without the experience and knowledge of our expert Captain.

It was a 45-minute battle that I honestly didn’t think I was going to win. We did try and release this beautiful fish, which must have been over 150 pounds. Unfortunately, however, we couldn’t get her back down in time to save the fish, and I wasn’t going to let the seals have their way with such a beautiful specimen.

We also caught numerous yellowtail, calico bass, sheepshead, and a few nice halibut. But I also want to thank the cooking staff and the fish cleaning crew. They are always very accommodating to all of your needs and wants. I would also like to thank Mike Felix for all of his hard work, he is a great addition to the team, and I look forward to seeing him again next year.”

Henderson concluded his report by saying, “This was my 11th year of creating great memories with Cedros Outdoor Adventures, so if you’re looking for a fantastic destination where you can truly get away and catch fish, this is the place to go. I guarantee you won’t regret it!” 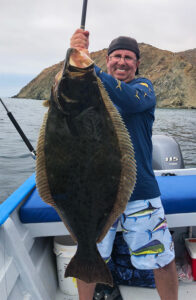 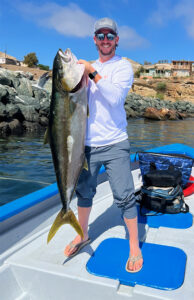 First-time visitor, Jake LaPorte came to the Island with his dad, Sam, and fishing buddies, Chris Cribs, and Dave Hough. The group had a grand time hooking up with yellowtail up to 40-pounds, which were taken on live bait, surface iron, and by trolling purple Rapalas.

LaPorte commented, “The yellowtail fishing was great! We caught them all by either using mint surface iron, slow-trolling live mackerel or by fast-trolling Rapalas. The mackerel color jigs also worked very well.

He finished his report by saying, “All of our halibut we’re all caught on dropper-loop set ups using 10 to12 ounce torpedo sinkers to get the mackerel to the bottom as quickly as possible. We fished them using 60-pound fluorocarbon leaders and 65-pound Spectra and didn’t lose a single fish. We all had a great time.” 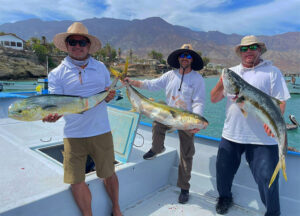 Other successful anglers this week included Anthony Martinez, and his close friends Evan Schercongost, and John McKaskle, Jr., who scored on big yellowtail and a few dorado during their visit.

Carlos Bedley, and his dad, Gerry, were also out on the water last week and enjoyed a yellowtail-fest while catching forktails up to 39-pounds while fishing with live mackerel. 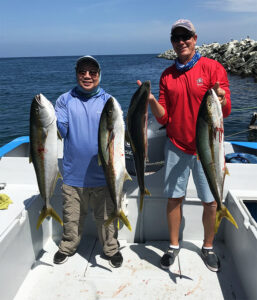 Longtime client, David Chin, wraps up this week’s report rave reviews, “We just returned from our 4-day Premium Guide trip. Going through CBX was a breeze. The fishing at Cedros was awesome, we had limits of 30 to 40-pound yellowtail.

My biggest, 40-pounder, was caught on live bait was caught at the lighthouse by the point on the south side of the island.  Better yet, I caught ity while using Daiwa Proteus rod that I borrowed from the office. I can’t wait for next season at COA!”

What’s on tap for next week? More dorado? Perhaps a wahoo? Tune in next time to find out.