Once again, big yellowtail and trophy-sized calicos ruled the roost around Cedros Island leading into the Labor Day weekend. Many of the anglers visiting at the Island this time of year have been here several times before; while first-timers get an opportunity to understand why this is one of our most popular seasons among veteran saltwater anglers.

This was the second trip for Paul Smilanick, his brother, Joe Smilanick, and their fishing buddy, Bill Lafferty, who came down from Sacramento for a premium, 4½ day angling adventure.

Paul reports, “We caught yellowtail every day of our trip, most of which weighed at least 25 pounds. Thursday ended up being our best day with 15 of the fish taken, which was our daily limit for the 3 of us. We took them slow trolling lures, fly-lining live mackerel, and on a variety of jigs and lures.” 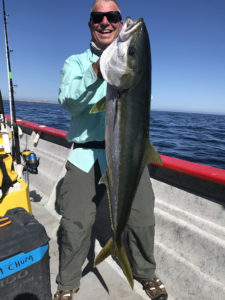 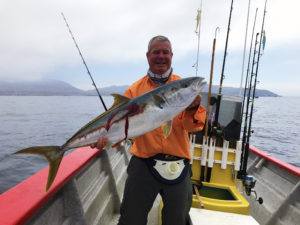 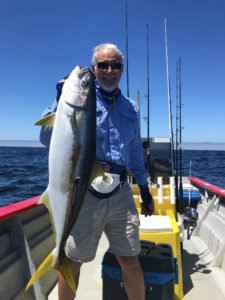 Some anglers were less interested in big yellowtail and far more focused on the world-class fishing for trophy calico bass that Cedros Island has become famous for. Jack Preston and his regular fishing buddy, Dan Sedden, have taken advantage of this opportunity on several previous occasions and returned once again with checkerboards in their sights. 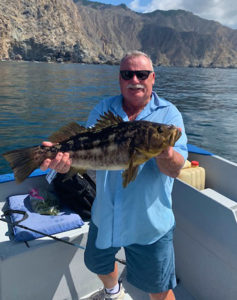 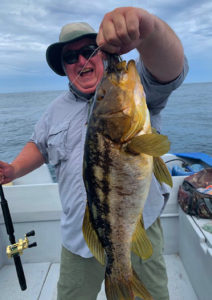 Preston offers, “The first day we fished St. Augustine area and found some decent calico bass action, as well as inadvertently catching a few yellows on our bass gear. The next morning, we cruised up to the northern end of the island and got into a non-stop calico bite. We got hit on almost every cast. What a day …it was unbelievable!” He added, “We used Reeb’s kelp assassins, Reeb’s swimbaits, and hard baits. The kelp assassin was, by far, the most productive.”

Jim Bentley, and his dad, Jim, who is an avid fly angler, have been to the Island several times and this time came with a party of 9; 4 of whom had never been there before. Despite a glut of red tuna crabs, Jim’s dad was not disappointed and ended up catching a host of chunky calico bass on the fly. Others in the group did well taking yellowtail up to 25 pounds on scrambled egg, blue & white, and mint flecked bottom iron.