We are now enjoying wide open late summer fishing conditions on Isla Cedros, and over the past 10 days, visiting anglers have been treated to a frenzied bite on a variety of popular gamefish. As usual, the calico bass action has been non-stop with most fish ranging between 3 to 5-pounds; although there have been a few that reached the 8 to 9-pound mark.

The yellowtail bite has been strong, with fish up to 50 pounds being caught on live mackerel, bottom iron, and hard baits. The halibut have also been on the chew, some of which have weighed out at over 20 pounds.

Mark Kosmowski and his fishing buddies, Krys, and Rich, came down to the Island from Oregon to get a crack at some big forktails. As Mark wryly commented, “Not many yellowtail roam the seas off the Oregon coast.”

On their first afternoon of fishing after they landed, the trio fished the south part of the Island for 15 yellowtail up to 15 pounds. The following day they caught fewer forkies, but they were considerably bigger fish in the 25 to 30-pound class.

Over the next few days they caught several more yellowtail on live mackerel as well as yoyo and surface iron. They also took and released an abundance of 3 to 4-pound calico bass on plastic, with Reebs Kelpsassins taking most of those fish, however, they also hooked a 6-pound checkerboard on surface iron.

Shortly before flying out of Cedros, the group took a 3-hour morning trip out, which yielded 8 large yellowtail weighing 25 to 30-pounds that hungrily inhaled live mackerel and sardinas. It was the perfect conclusion to a fishing trip of a lifetime, as the three anglers flew back to the mainland wearing broad, satisfied grins.

Fishing buddies for over 40 years, John Parlato and Terry Tenant also paid a visit to Cedros Island with yellowtail on their minds, and they were certainly not disappointed. During their stay, they consistently limited out on big forkies weighing between 24 and 30-pounds using live mackerel and scrambled egg surface iron.

The duo also got into some great calico bass action using red plastics, which mimic the appearance of the red tuna crabs that tend to occasionally cover large patches of the ocean’s surface around the Island this time of year.

Seasoned Cedros anglers, Esvin Hernandez, and his dad, Jorge, flew down from SoCal and were also looking forward to catching some more of the trophy sized yellowtail that the Island is famous for. They not only scored well on big yellowtail using mint & white iron, they successful in that regard; they managed to take limits of halibut on several days, which ranged up to 20 pounds.

Nonetheless, the biggest surprise of their trip came when Esvin was casting a hard bait from the shore while stalking a large halibut that he had seen chasing bait in the shallows. Suddenly, on his third cast, he hooked up with a huge fish and quickly realized that it was not the halibut that he had been targeting. After a spirited battle, Hernandez ended up landing a 50-pound yellowtail right off the beach.

Really; a 50-pound yellowtail from shore? Remember, this is Cedros Island! 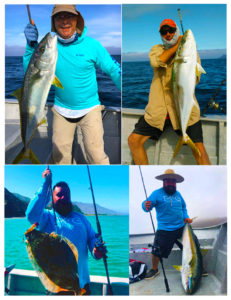