Labor Day may have already come and gone, but the summer weather and fishing around Isla Cedros continues to be hot with virtually no end in sight. The abundance of baitfish in the area has fueled an explosive bite by a wide variety of popular gamefish.

John Gilkerson and his party of 11 anglers, 5 of whom had never been to Cedros Island before, enjoyed banner fishing for trophy-sized yellowtail that surprised many of the newbies.

Gilkerson commented, “The fishing for yellowtail was good most days, and one of our group got a 52 pounder that was weighed at the dock.  In addition to the 52-pound yellowtail, there were several caught by our group that were in the high 30 to 40-pound class. Bait was thick everywhere, and with so much to eat it is amazing the fish want to bite at all, but the yellows still kept hitting the surface iron and Rapala’s.”

In regard to the checkerboard action, he added, “The calicos were a little elusive, and not on the kelp beds or boiler rocks as much as years past. We ended up taking most of our fish just outside the kelp over structure.” 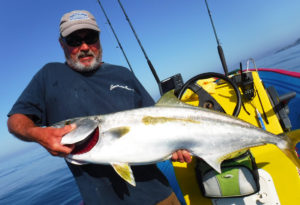 Western Outdoor News Editor, Pat McDonell, and his group of 13 WON anglers came to the Island ready to catch fish, and that they did. Top honors for the party were taken by Tyler Barnes, and his wife, Candy, who took over 130 fish on Colt Snipers. They did have a bit of an edge, however. This was their 25th trip to Cedros Island. 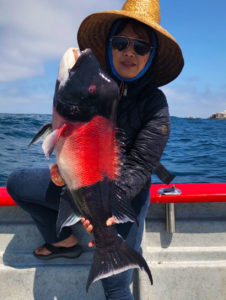 Doug Aiken and his buddies flew down from SoCal took limits of yellowtail each day of their trip using blue and purple Rapalas, with the biggest being a 35 pound forkie taken by Bart Williams. The group also took calico bass up to 8 pounds on plastics. 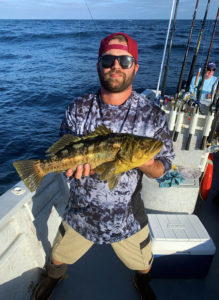 Daniel Scanlon’s party of 9 first-timers also limited out on yellowtail every day and caught over 200 forktails over their 3 days of fishing. Their biggest fish weighed just over38 pounds.
Scanlon concluded his report by saying, “Our boat did some calico fishing the last day, and it was wide open! The 3 of us caught over 50 calico bass in just 2 to 3 hours of fishing.”