Quality grade yellowtail continue to rule the surface action at Isla Cedros, as hordes of frenzied baitfish scatter in the often futile attempt to avoid becoming lunch for the hungry forktails. The calico bass bite remains active for fish up to 8 pounds, but the biggest news last week was the landing of the season’s first bull dorado shortly before the beginning of fall.

Avid sportsman, Gary Griffin, who is a resident of Rancho La Bufadora south of Ensenada, joined his son, Rick, and fishing buddies Rick Lee, and his son, Charley, for a reunion celebrating their last trip to Cedros Island half a decade before. They arrived on the Island focused upon yellowtail, and ended up limiting out on fish up to 25 pounds while trolling purple hard baits. 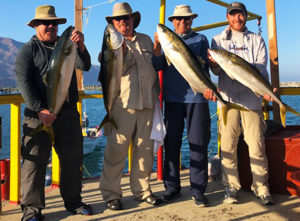 Kirk Mitchell and a couple of his friends from San Diego were first-timers and ended up being surprised by the great fishing they encountered. The trio fished around the north point for big calico bass up to 7 pounds that inhaled 6oz. Salas mint green surface iron. Over the next few days, they limited out on yellowtail using scrambled egg surface iron. 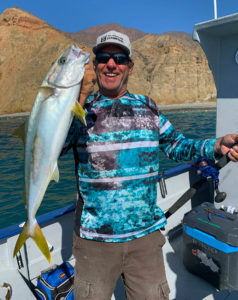 However, Gary Fuller made the surprise catch of the week with a golden, 25-pound bull dorado. 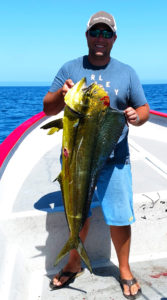 Charlie Osaki and his buddy, Mark Sirof, from Orange County were on their second trip to Cedros and experienced the fishing adventure of a lifetime. They reported catching limits of yellowtail on blue & white surface iron, as well as a huge 45 pounder in only about 15 feet of water.

Osaki relates, “I was using a live mackerel and 30-pound test fluorocarbon leader on a Daiwa 300 Lexi, and Phenix M1 rod. The yellowtail took the live mackerel, ran up the beach, and then suddenly took off for the channel, where we finally gaffed it in 375 of water; over a quarter mile off the shore. 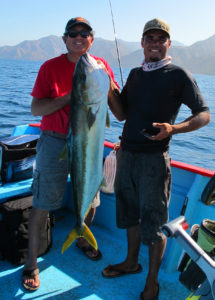 The next day at the same location, we got a 37-pound yellowtail hooked at approximately the same depth while using a live mackerel, but we were able to bring that one over the rail only about 400 yards off the beach.”

Charlie Osaki concluded his report by adding, “The south end of the island was limit fishing for virtually all pangas; with limits coming within two hours to as long as a half day. Trolled mackerel was the favorite natural bait, but irons, like Tady 45 and Candy Bars in blue & white and sardine colors working best. The few boats that trolled large Rapala lures and also did well. Most of the fish in this area ranged from 10 to 18 pounds.”