As we head into the fall season, the fishing off Isla Cedros remains hot with yellowtail dominating the catch counts. But there were plenty of other species on the chew as well. The varied, unique fishing venues available around the Island offer everything from massive kelp forests and long stretches of sandy, inshore bottom, to a wide variety of rocky structures that harbor a number of popular gamefish species.

Uikilifi Niko’s party of 12 anglers from the Los Angeles area came to Cedros Island on a 4-day visit and were treated to banner yellowtail fishing that yielded them daily limits during their trip. Most of the forktails were caught on live mackerel taken on bait rigs. The group also encountered an active bite on ocean whitefish, the only Pacific member of the tilefish family, which are prized commercially along the Atlantic coast. Over a 2-day period, they caught over 30 of these tasty fish weighing up to 9 pounds.

Cedros Island is also a fly anglers paradise, and Jordan Cavanaugh from Orange County was on his 7th trip to the Island to take full advantage of the situation. He ended up catching and releasing over 100 big calico bass up to 6 pounds with 8, 9, and 10 weight rods on red crab and green mackerel patterns and blue & white streamers.

Earlier, Gavin Chun and his buddies flew down from the Bay Area and cleaned up on fat yellowtail using trolled, live mackerel and blue and white surface iron in addition to several other species including calico bass, California sheepshead, halibut, whitefish, and a few big bonito. 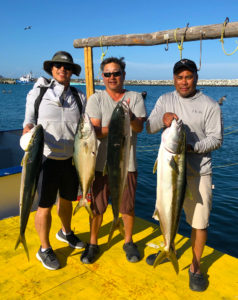 At the conclusion of their multi-day fishing adventure, Chun remarked, “We had a fabulous time. The great fishing goes without saying; we caught six different species of fish in one day. This trip was on my bucket list, and going back to Cedros Island again is now on my bucket list as well.”