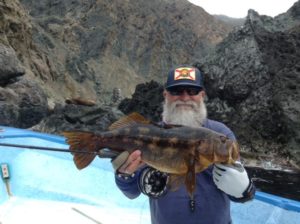 The Calico Bass fishing on the fly was simply put – amazing! I averaged probably 50 fish per day and many of them went a few pounds or more. I have never seen such a consistent high grade of bass, constantly coming over the “rail” . My biggest Calico of the trip was a boiler fish, taken fishing the north end of the island on a Jeff Hernandez tied “Creature” fly. The fish probably went 6lbs plus. One morning fishing La Colorada, I nailed 6 big fish on 6 casts and they were all tankers!

All the Calicos on the trip were released, so they will grow bigger for me next year, additionally also released was one small yellowtail and 2 Grande bonito. I did catch an additional yellow on the fly and 4 more to bring home for the BBQ on my Pangero Captain’s Rapala.

Fly fishing is my focus at Cedros and it never disappoints, with each trip being epic! All the staff at Cedros Outdoor Adventures is the best, the food is abundant and spectacular, and the rooms are the most comfortable in Baja, first class all the way. Not to forget my amazing Pangeros Oscar and Toro, they are best I have ever had in Baja in 30 years of fishing there. If you want to catch big Calicos and yellows on the fly – fishing boilers, reefs and the kelp – Cedros and Cedros Outdoor Adventures is the best place in the world to do so.

Tight Loops and see you next year!

Note from COA: By sending us this info and pic, Jordan is now entered in our December 1 drawing for 50% off a future trip! Did you travel with us in 2016 or 2017? If so, send your name, dates of trip, details of what you caught, where you caught it and how you caught it, and at least one pic to melanie (at) cedrosoutdooradventures.com. 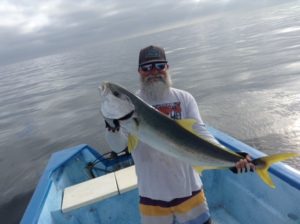 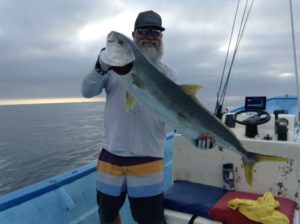 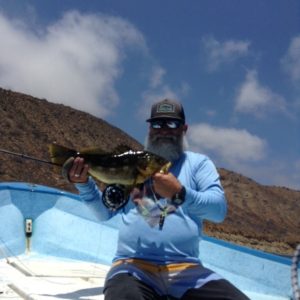 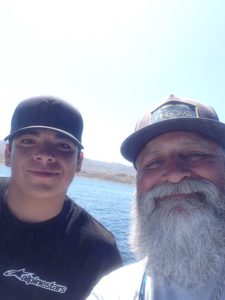 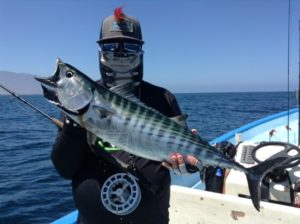 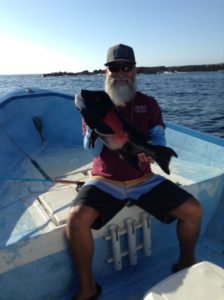