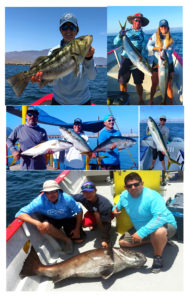 The past 10 days have produced bountiful catches of a wide variety of popular gamefish for the lucky anglers visiting Cedros Island. Huge schools of bait boiling on the surface have provoked Kamikaze like attacks from large bonito and hungry yellowtail. Boats report encountering massive numbers of red tuna crabs and swarming krill, which also cajoled an assortment of other species into a feeding frame of mind.

In addition to the sizable number of calico bass being caught, many anglers have also been surprised to find that the ‘yellowtail’ they thought was on the other end of their line actually turned out to be a big ocean whitefish in the 7 to 9-pound class. These tasty fish are the only member of the tilefish family on the Pacific coast; tilefish are a prized commercial species along the Atlantic seaboard.

The halibut have not been particularly active recently, although a few smaller fish have been caught and released. We have seen, however, a marked increase in the number of grouper and large black sea bass over the past few weeks.

While it may be legal to keep black sea bass in Mexico, it is also important to stress that these are an extremely slow-growth species, which is the reason that many anglers with an eye to the future choose to ‘catch, click & release’ these beautiful behemoths of the sea after bringing them to the boat.

Tom Wilkins, and his daughter, Kaitlyn, both longtime visitors to Isla Cedros, brought mom along this time; and the whole family ended up having an epic fishing adventure. In addition to hooking and landing numerous calicos, Kaitlyn topped off her catch with a monster checkerboard that really made her day.

The next day, Kaitlyn and Tom tied into a bonanza of yellowtail. Tom added, “The massive schools of baitfish crashing the surface sounded like heavy rain, and there were boiling calico bass as far as the eye could see.”

Patrick O’Leary, his dad, Michael, and fishing buddy, Bill Gallagher encountered similar conditions. O’Leary reported that they used their bait rigs to get small mackerel, then fly-lined them out to meet schools of hungry forkies. The trip yielded limits of yellowtail in the 35 to 40-pound class. On another day, Patrick brought a 48-pound yellowtail over the rail.  The trio also caught and released a bevy of calicos while yo-yoing Colt Snipers through the water column, as well as several large ocean whitefish.

Longtime Cedros aficionados’, Adam and Donna Walker, returned to the Island with a party of six, and over a 6-day period took more than 60 yellowtail in the 20 to 30-pound class, as well as a countless number of calico bass between 4 and 6 pounds that were promptly released.

Father and son team, Ed and Ryan Hayden, caught yellowtail up to 28 pounds on live mackerel, but the big surprise of the day was the 140-pound black sea bass that they took while trolling an anchovy pattern Rapala.

Garrett Edwards and his buddies came to Cedros to catch a big black sea bass, but it was not to be. But they headed into the kelp and started throwing weedless swimbaits and surface iron, which produced steady fishing for a bounty of quality calico bass. On their last day, they were treated to a wide-open bite of white seabass in the 5 to 12-pound range just inside the kelp line.

Mike MacPherson, Bryan Sanders, and Hieu Phan enjoyed the time of their lives during their fishing adventure with over 35 yellowtail ranging between 25 to 40 pounds.

MacPherson also reported,” We caught 8 species of fish, and also had easy calico limits daily with literally dozens thrown back.  The biggest surprise came while we were fishing for calicos on the north side of the island. I was just tossing back a calico bass when I suddenly hooked a monster black sea bass, which took me about 45 minutes to get fish in. I wasn’t sure what it was until our captain yelled out ‘Grande’.  When I asked if it was a yellowtail, he said ‘No, no …Black Bass!”  We got back in to the dock and the giant fish ended up breaking the scale, but we estimate that it weighed in between 150 to 165 pounds.”