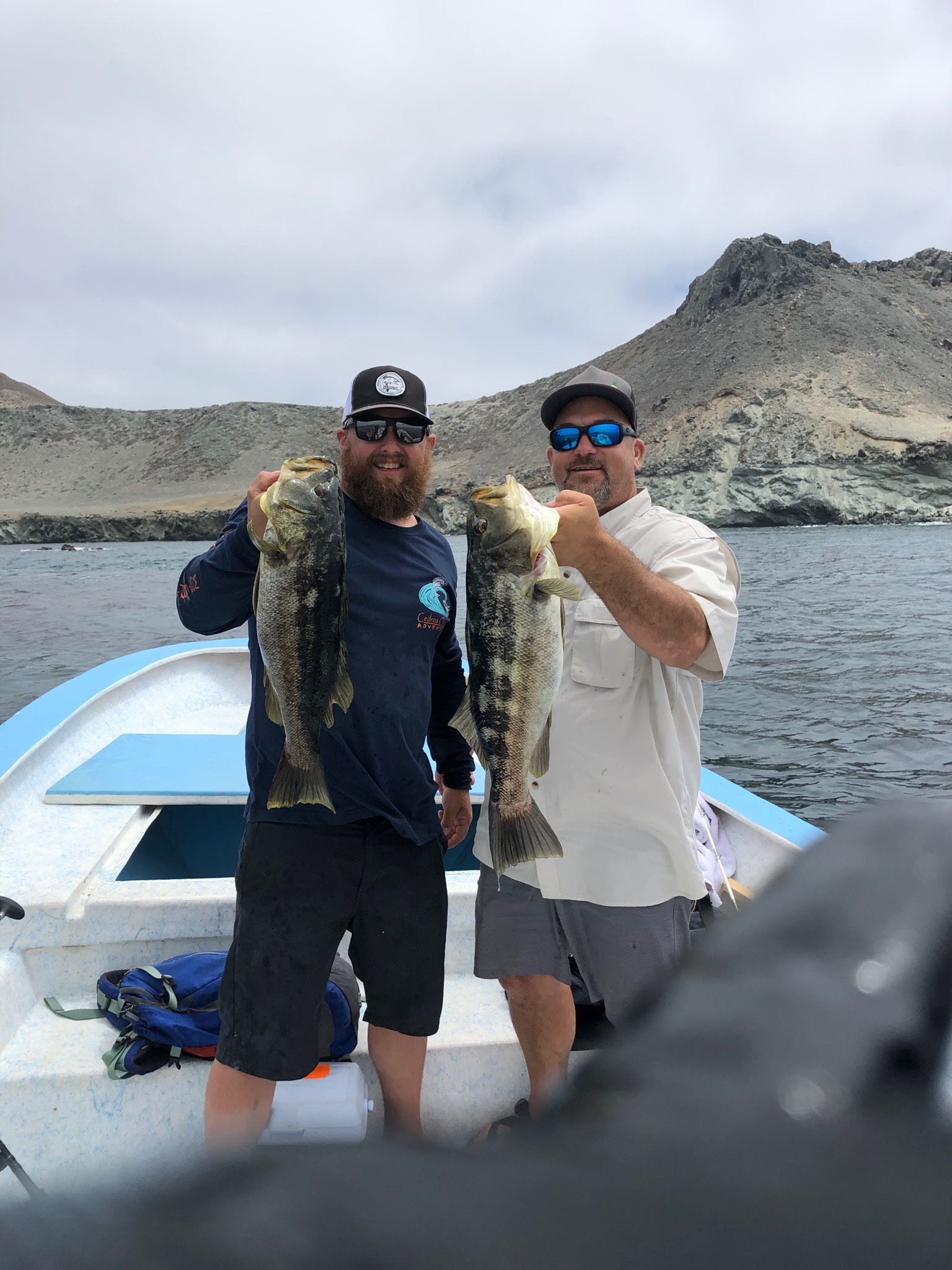 The new plane was spacious and comfortable. It shortened our travel time significantly, and we were on the island by 10:00, where Jose greeted us, assigned our rooms and boat.

We grabbed a bite to eat, and hit the water. Our boat was EL Sol, and Michael was our captain. We hit it off right away, and he will be my first request when I return.

We hooked up right away and fought our way through a bunch of Bonita and managed to boat 5 yellowtail and a handful of calicos, all with yo-yo irons.

Day two slowed down a bit. We made bait, and pulled out one nice yellowtail at the bait ball. We then headed out off of the salt plant, and trolled Rapalas. The Bonita were all over them, so we tried throwing irons for a while. This produced similar results, but we were able to squeeze out another yellow.We then ran east off the salt plant in a little deeper water, and got our final fish of the day. 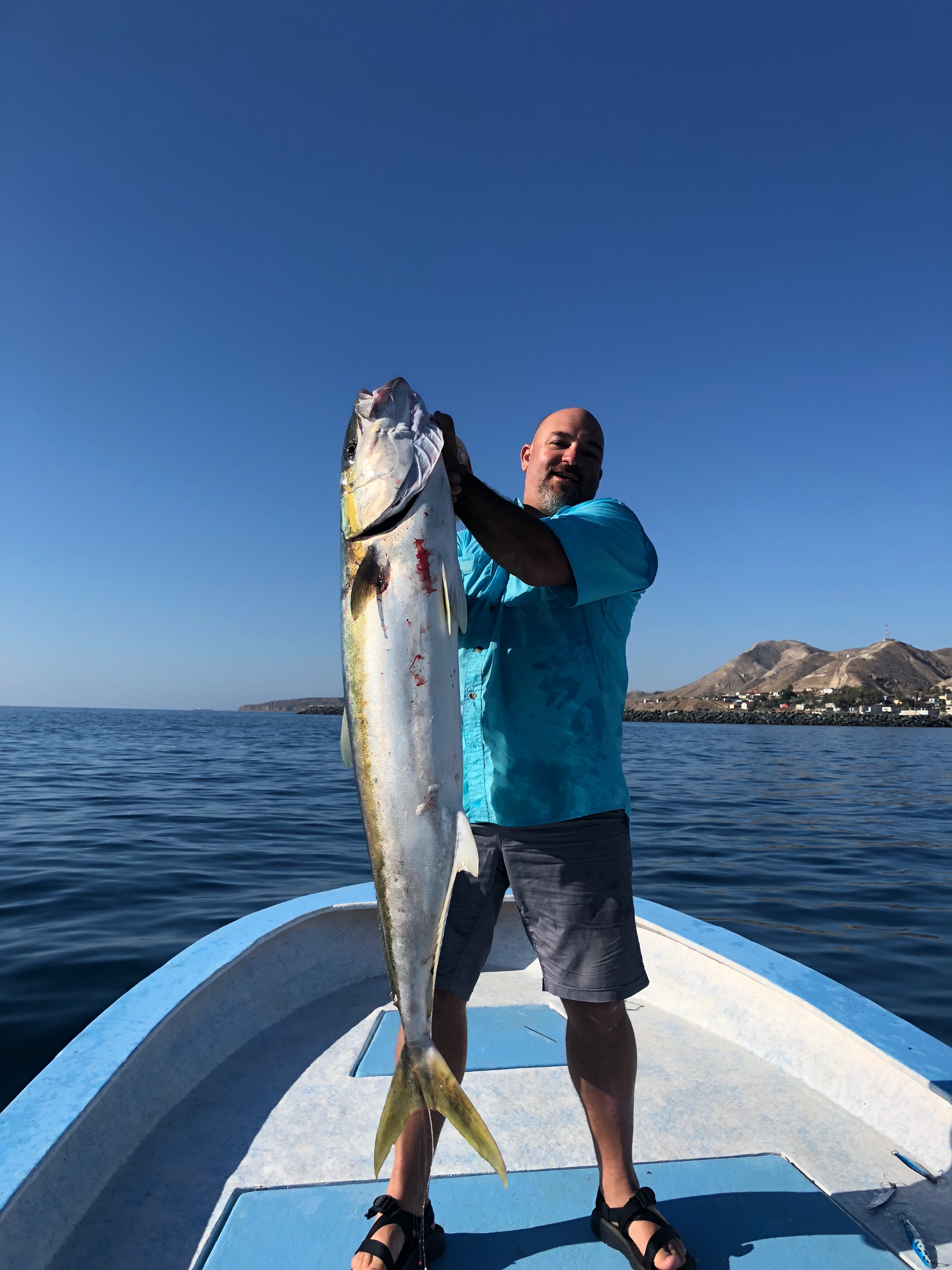 Day three we planned to make the trip to San Benito island. After making bait, we suited up in our rain gear. We got as far as San Agustín, but had to turn back to the leeward side due to the wind and waves. We ended up missing the bite, and chased radio fish all day. 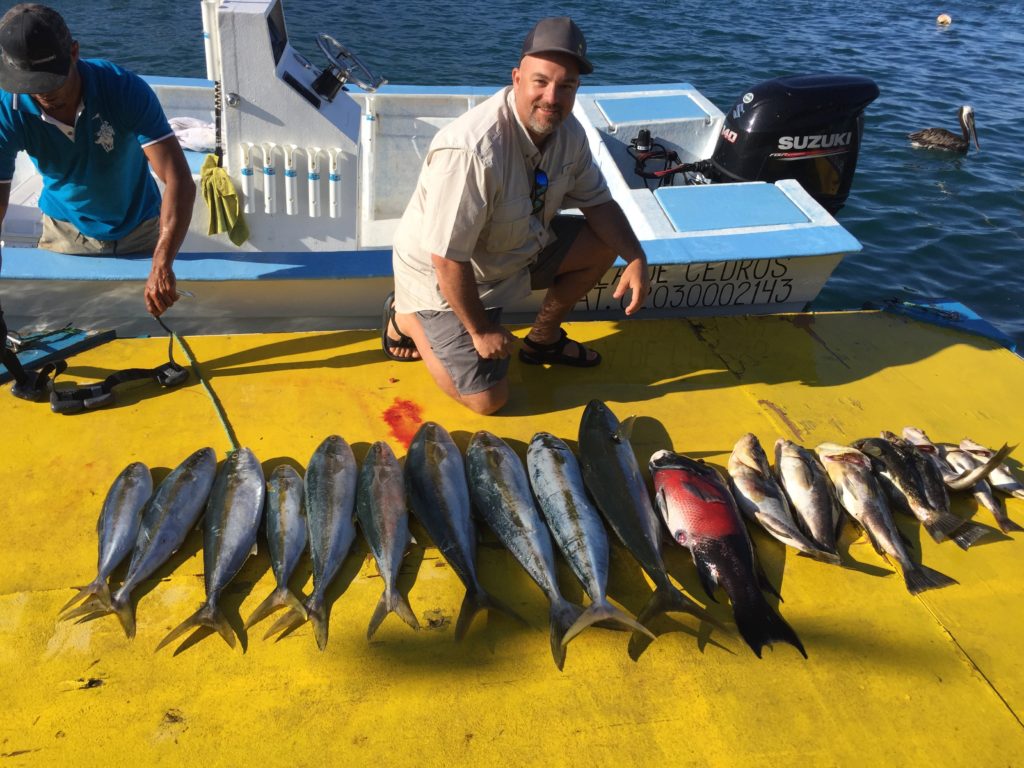 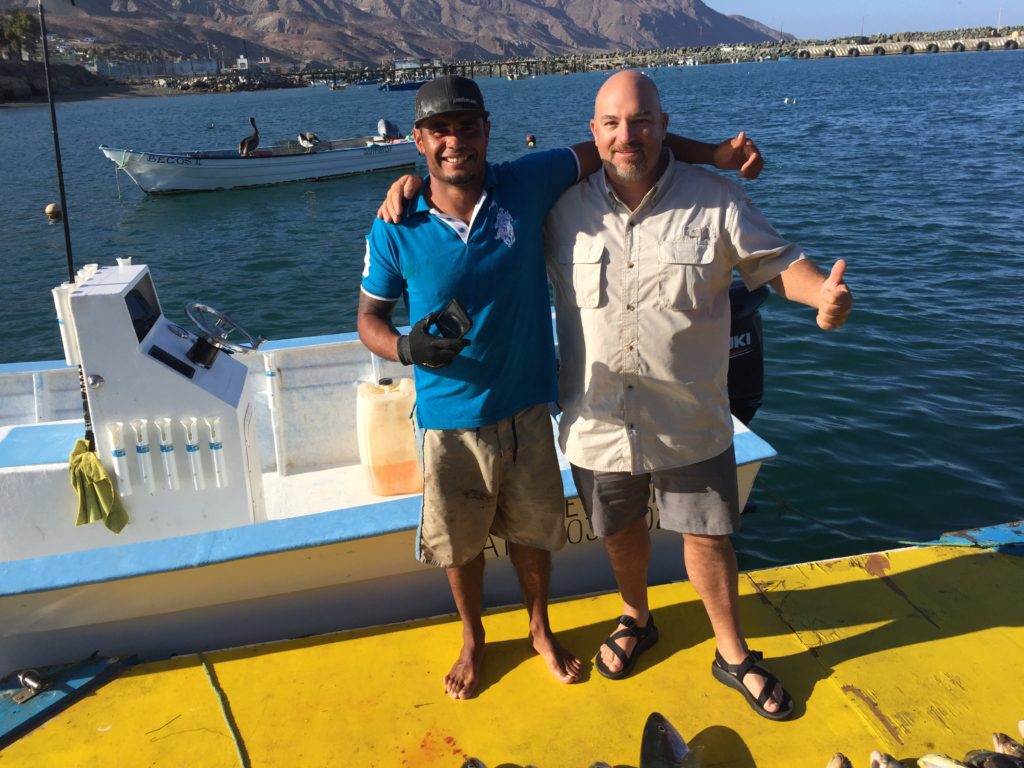 Day four, passed on the bait, and we made it to San Benito island. We passed through the channel between the two islands, and trolled Rapalas again. We hooked 3 yellowtail in a very short time. We posted up behind the big rock between the islands, and threw irons. I had a medium sized calico bass colored Kicker iron that was on fire. I was hooking up like crazy, and handing off my rod to let my boat mates do some of the heavy lifting. My buddy hooked what we assume was a black sea bass. The rod broke on half, and the line did too shortly after. I hooked into a Wahoo, that ended the lucky lure. 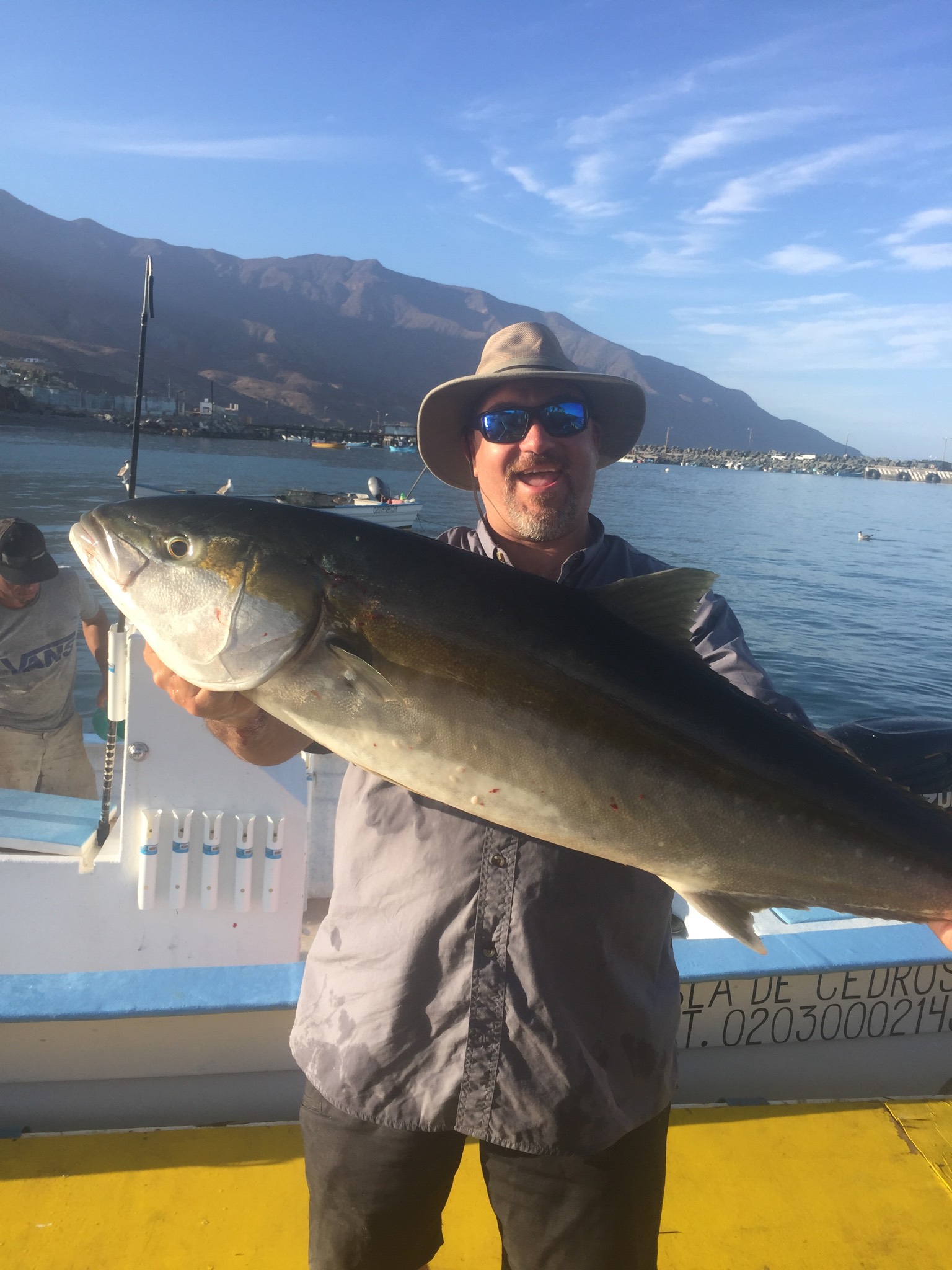 One of our group was a diver, so our captain put him in touch with his brother who lives on San Benito island, and is also a diver. They dove the shallows between the islands, while the two of us fished for calicos. We landed several, and got 3 giant ones. We went to check on the divers, and our friend speared a very big Sheephead, and the other diver got a yellowtail. We ended the day with 11 yellowtail, a Sheephead and a nice pile of calicos.

Day five was upon us, and it was only a half day, bec

ause we were flying out around noon.
We were making bait, and saw some yellows busting on the bait. I grabbed a yo-yo, and hooked up on my first cast. After that it was Bonita city. We moved around to get away from them, and tried trolling live bait. The next two yellowtail were pretty good sized, so I grabbed the biggest mackerel in the live well, and put it on my hook. My buddy got a Bonita on, so the captain stopped the boat a minute. I used this opportunity to hand feed an interested fish. It didn’t take long before line was screaming off my reel. After I had the hook secure in the fish, I handed off my rod to my buddy. He fought the beast for a long time, and we saw it shoulder to shoulder with another fish of equal size cruising through the shallows. We didn’t realize the size of the fish until it was on the gaff. 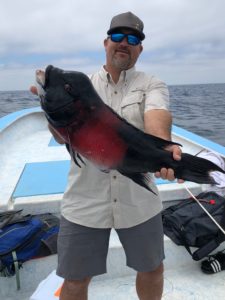 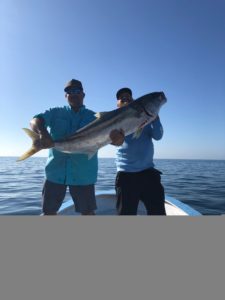 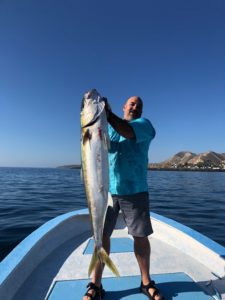 Our captain who was born and raised on the island has never seen its equal. When we got to thedock, everyone’s jaws dropped when we pulled it out of the fish box. When it was hung up on the scale it weighed 49 lbs. Just over 22 kilos!

It goes without saying that I’ll be back next year to find that other one.