We are now headed into August, and as each week passes, the opportunities to catch a wide variety of species in the rich waters surrounding Cedros Island continue to expand. That is one of the reasons why the Island remains has become a unique sportfishing venue that draws anglers from virtually every corner of the globe.

The month of July has been extremely productive, particularly in regard to the large number of quality-grade yellowtail weighing up to 40 pounds or more that have been taken by our visiting anglers over the past few weeks. There has also been exceptional action on trophy-sized calico bass up to 10 pounds that have been readily inhaling well-presented plastic baits in red and orange hues. Big white seabass, halibut, and black sea bass have been making an appearance as well. 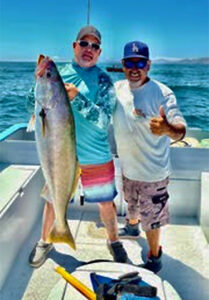 Earlier in the month, Chris Bricker paid a visit to Cedros and had the opportunity of catching his first yellowtail. As a matter of fact, he caught limits of forktails, one of which weighed out at 40 pounds. Bricker was even able to hook and land a trophy-grade 44-pound white seabass, along with catching and releasing a bevy of calico bass up to 8 pounds.

Bricker offered, “This was my first time at Cedros Island. What an amazing experience, from all of the staff and guides. The hospitality was off the charts! We really appreciated our Captain, Diego, who never gave up, and was always able to put us right on fish. The other anglers on all the boats also enjoyed good catches and took home lots of fish.  A big shout out to Cedros Outdoor Adventures; an amazing place that I highly recommend.”

The Island not only provides an attractive getaway for seasoned anglers but for families as well.  Herb Jalowsky, a veteran fisherman, recently made a trip to Cedros and this time brought along his grandson, Sawyer. 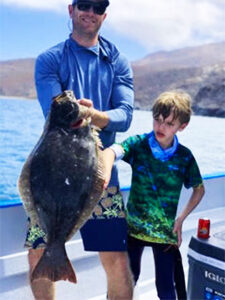 During their visit, the duo caught a good variety of fish, but also took a number of nice halibut, much to the amazement of young Sawyer, who had never encountered such a feisty, flatfish before. 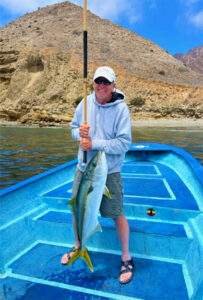 San Diego angler, Doug Trujillo, booked his first trip to the Island recently while accompanying a few friends, who suggested that he join them. The group caught limits of yellowtail, calico bass, and halibut during their visit, and Trujillo was extremely impressed.

He commented, “The experience was unbelievable, and I am already planning for the next time when I can finally get to go back. I’ve told all of my friends who I have fished with for years that this is by far my best angling experience in over 10 years of fishing.

The staff was incredible and never missed a beat.  I would highly recommend it to anyone who enjoys fishing and relaxing in a safe, pristine environment.” 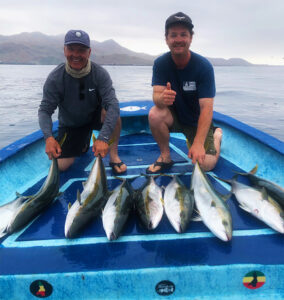 Long Beach residents, Quinton Bowen, and his dad, Chris, were also on their first trip to Cedros Island and were astounded by the quality fishing that greeted them upon their arrival.

Bowen reports, “The fishing trip was great! It was me and my dad’s first time on the island. We started most of the mornings off by throwing surface iron for yellowtail. The mint/white and the blue/white colors worked the best for us. Once the surface action slowed down, we switched to fishing the yo-yo iron. Scrambled egg and blue/white colors were great on the drop.”

He concluded by saying, “After we had had enough of the yellowtail action, we started fishing for calico bass. The mint/white surface iron was the best for the bigger fish, but we caught a lot more of them using 5” swimbaits paired with a 1.5-ounce lead head. The brown, green, and red colors were best.

The food, hospitality, crew, and everyone else involved were awesome, not to mention our great captain, Indy.”

The coming of late summer also often marks the time of year when big dorado and other migrating gamesters from more southerly waters find their way up to Cedros Island. These events are often accompanied by the appearance of large balls of bait fish boiling near the surface as they are attacked from below while, from above being descended upon by flocks of hungry gulls and diving pelicans.

These types of feeding frenzies are nothing short of mesmerizing when being viewed by determined anglers fishing from one of our local pangas. The good news is, there are still several months left to get in on the fun!