The lucky anglers visiting Cedros Island this fall have been treated to an increasingly active bite on quality grade dorado and yellowtail, along with the world-class calico bass fishing for which the Island has become famous. Despite occasional seasonal breezes, there always seems to be an abundance of places to go that present a host of opportunities to catch the fish of your dreams; and last week was no exception. 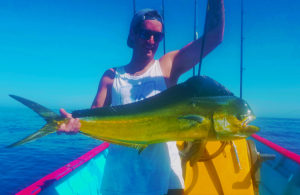 Tony Bykerk and 3 of his friends from Mission Viejo went for the gold and cashed in bigtime with a total of 10 fat dorado weighing up to 25 pounds during their 4-day stay on Cedros. However, due to the influx of red tuna crabs the calico bass fishing was ‘hit and miss’, yet they still managed to take a few checkerboards up to 6 pounds. In addition to the dorado, they also took full limits of yellowtail between 20 and 40 pounds to add to the bounty in their ice chests.

Russel Parker, and his wife, Jeanette were visiting Cedros Island for the first time from Long Beach, and encountered an outstanding bite on calico bass weighing 8 to 10 pounds while fishing around Natividad.  Since there were few very few red crabs in the area at the time, the fish were quite cooperative in attacking their 4 to 5-inch swimbaits in red and green hues.  The duo also took limits of yellowtail up to 35 pounds while slow trolling live mackerel.

Cedros veteran, Roger Eckhart, was with a couple of fishing buddies on his 7th trip to the Island on a 5-day fishing adventure that lived up to everything they had been expecting, and more. 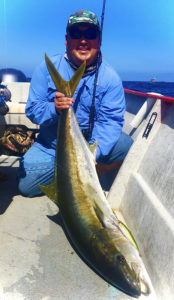 Eckhart reports, “We had a wonderful week of fishing! We love to target the calicos, and fished many of great locations around the island like Punta Norte, Colorada, and many others. Yellowtail were plentiful around the island, especially in the airport area. Our lures of choice were the Rapala Xrap 40 in purple for the yellows, as well as mint or green and yellow surface iron.

The calicos were favoring hardbaits such as Rapala Xrap 14’s in variety of colors, and MC weedless 8” swimbaits brownbait colors. We enjoyed great ‘catch and release’ style fishing, racking up 50 to 75 calicos per angler in the 2 to 6-pound class each day. Most of the fishermen going for yellowtail were getting easy limits of fish weighing between 18 and 40 pounds.”