As we head out of our final week of the 2019 fishing season at Isla Cedros, it can certainly be said that this was one of the most productive summer and fall fishing seasons that our visiting anglers have experienced in the past few years.  As time passes, it has become obvious that recent efforts to preserve and maintain the Island’s unique marine environment have begun to pay off in grand style.

This year, visitors fishing around Cedros Island have been treated to a spectacular array of species. These have not only encompassed the trophy-sized yellowtail and calico bass that made the Island famous but also include big broomtail grouper, black sea bass, golden dorado, fat California halibut, chunky ocean whitefish and a plethora of other incidental species that were caught over the past few months.

Steve Leiphardt, and his fishing buddies, Jason Welsh, and Craig Murakami, paid their first visit to Isla Cedros in search of big yellowtail last week and encountered a wide-open bite on quality grade forktails up to 47-pounds that exceeded their wildest dreams. 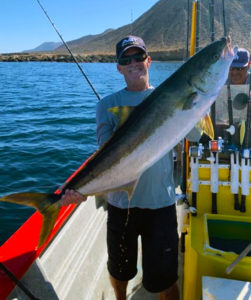 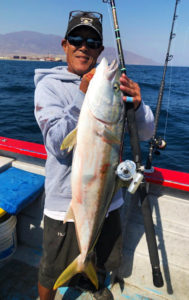 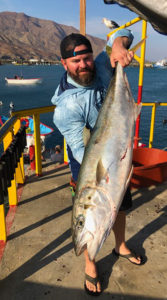 Leiphardt reports, “Most of our yellowtail were in the 30 to 40-pound class, and we caught most of them while slowly trolling live mackerel on 30 to 60-pound test fluorocarbon leaders. To top things off, we also fished around Christmas Island on our last day, where we caught and released a bunch of big calico bass.”

← October 27th – TROPHY SIZE YELLOWTAIL STILL ON THE CHEW AT CEDROS ISLAND!Fly-In or Boat In itinerary →