One of the best indicators of a prime sportfishing venue is its ability to lure anglers back year after year once they have experienced its fishing for the first time. Such a locale is Isla Cedros; an island that offers far more than the plentiful fish that swim in the waters surrounding it.

Shea McIntee and the crew from ‘Stoked on Fishing’, a southern California based travel adventure and fishing show that is on Fox sport West and Prime ticket, brought a group of 16 anglers with them on the shows 5th trip to Cedros Island last week, and 4 of the anglers had never been there before.

The group scored well, with daily limits of quality grade yellowtail weighing between 30 and 40 pounds, a king-sized California halibut that tipped the scales at over 30 pounds, and a variety of other fish including several fat calicos up to 5 pounds, which were immediately released.

Shawn Sullivan, from Evansville, Indiana, was on his 9th trip to Cedros Island with 5 fishing buddies, 3 of which were visiting the Island for the first time.  Sullivan reports, “I love taking guys to Cedros as everyone is in awe of the world-class fishing, majestic views, and the sheer beauty of the island and its abundant marine life.

As always, we had great fishing on this trip. The fishing for yellowtail was off the hook.  We had to stop keeping yellowtail by Saturday afternoon because we had so much. We blacked out our tank with mackerel each morning, and the yellowtail showed a preference for it when the baits were slow trolled. The yellowtail were really big; in the 30-35 pound class. And that is really a work out bringing up yellowtail of that size. 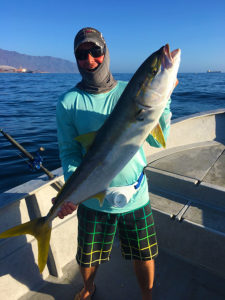 When the red crabs were too thick around the Island one afternoon, we took about an hour boat ride over to Chester’s Rock just south of Punta Eugenia on the mainland. This area has a huge kelp forest. The calico fishing was awesome with one of our pangas catching over 100 calico in the afternoon session. On several occasions, we had as many as 10 other calicos following a caught fish to the boat.”

Sullivan concluded his report by saying, “Although people come to Cedros Island for the world-class yellowtail fishing, the variety of fish to be caught at the island allows one to experience a lot of different types of fishing when visiting. We usually go in October as we have traditionally caught dorado and yellowfin tuna during October, in addition to the other species that inhabit Cedros.

Apparently, Dorado were caught in the week previous to our vacation but had moved out of the area. Last year in October, we caught white sea bass upwards of 60 pounds. We will be back next October to experience the variety of species that inhabit Cedros Island during that time of year.”