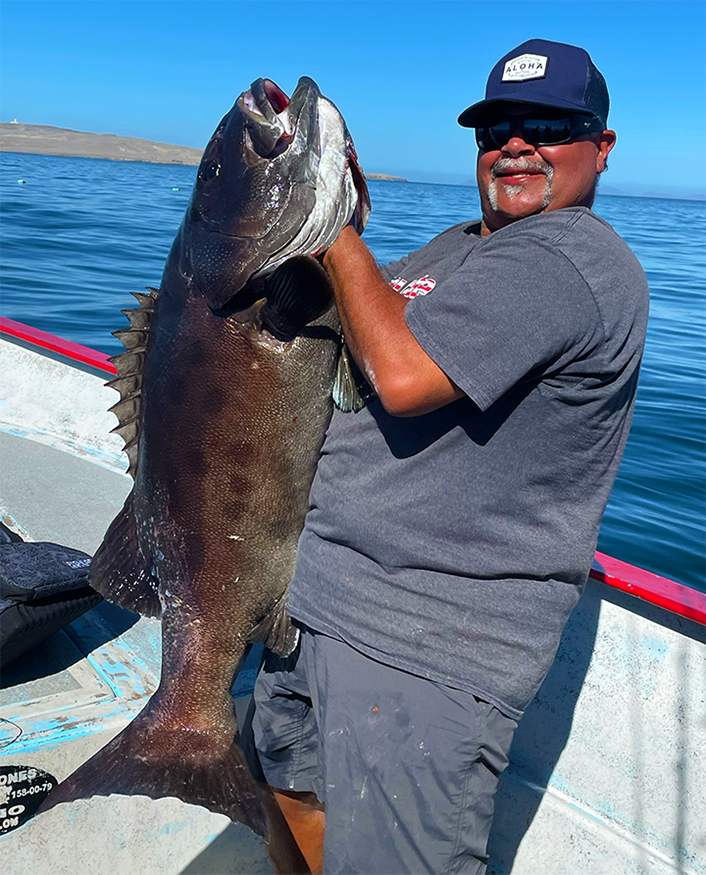 As we head into November, the fishing action in the waters surrounding Cedros Island continues to be excellent with good catches of big dorado, yellowtail, white seabass, fat calico bass, and chunky California sheephead, along with an occasional black sea bass to help round out the catch.

Visiting anglers have been delighted by the volume and size of the fish they are catching, and are offering rave reviews of their experiences fishing around the Island.

One lucky group was able to spend a full 8 days fishing Cedros and were well rewarded for their efforts. Steve Morales, from Lompoc, Ca, Craig Troop, from Prescott, Az, and their buddy, Mike Reebe, from Reebs Lures, enjoyed banner fishing during their entire visit.

Morales reports, “One of the things that I remember most, is the diversity of fishing opportunities on Cedros during the month of October. If you wanted to target yellowtail, and trophy hunt them, it was there. if you wanted to focus on dorado, they were there. Of course, sheephead and calicos are there also.”

He recommended, “Come prepared 60-pound test for trolling, and no less than 40-pound test for casting. We had a lot of success with the 7x Salas surface irons. The water was so clear that you could actually get to see the yellowtail grab your iron, or following it back to the boat. 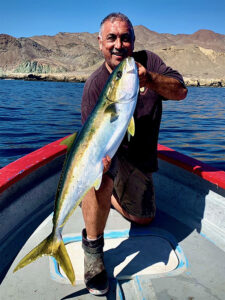 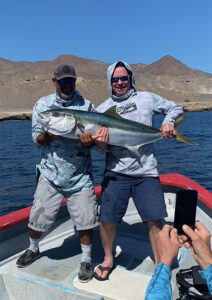 The Reebs jigs were perfect plastics for the calico fishing, and a few times the guys were even catching yellowtail tail on them. I don’t have the video, but one boat came back with footage of 30 to 40 yellowtail attacking and killing a mako shark by charging it and ramming it with their heads. The guys in the boat were casting into the frenzy and caught numerous yellowtail in the process.”

Morales concluded by saying, “I’ve been on a lot of fishing trips, from Alaska to Baja, and our trip to Cedros was truly one of the best. My fish came home in perfect condition as well, not to mention a few kilos of lobster tails ‘to go’.”

Garrett Toy, a Cedros Island veteran, returned again this year for an even more meaningful visit than previously.

Toy explains, “I had a great time back at the island. This time I joined a friend’s group. I was worried I wasn’t going to make this trip as I have been battling cancer. I finished my third round of Immunotherapy about 11 days before flying out to the island.”

He continued, “This was my 5th time down there and my friend’s second time. With us were three guys who were there for the very first time.  Our trip was from 10/23-10/26. We were a little hesitant about how the fishing would be since the wind and swell were up when we arrived. However, fishing was great from the start. The first two days all of us caught our limits of yellowtail and a couple of dorado.”

“We fished the southeast area below the salt boats.  Most fish were caught on trolled Rapalas, a few were caught on yo yo blue and white. I happened to catch three on a trolled sardine-colored swimbait. However, the third day was a particularly special day for me, as we tried up the north on the lee side.”

“Jose, the Captain of our panga, Ceviche’, had said the calicos were slow on this side of the island, but we would give it a try.  Fishing a white tube bait and using an inshore rod and reel with 30-pound test fluorocarbon, I caught a calico on the first cast. Better yet as soon as we hit this one stretch of beach, I hooked and landed 6 halibut. Later in a little deeper water using chunk mackerel, we caught two Pinta Cabrilla and 26 lb yellowtail.”

Toy concluded by saying, “All the guys in the group had a great time. It was also special since some people we met were also from the (805) area and we all had some mutual acquaintances. We look forward to coming back again next year.”

Shea McIntee, host of the FOX Sports show, Stoked on Fishing, once again brought another group, this time hosting 18 anglers, to fish the Island on a 4-day visit.  The group took out a total of 6 pangas daily and experienced some first-class dorado fishing during their stay. Most of the fish weighed in between 10 and 25 pounds and were caught on a combination of slow-trolled mackerel and surface poppers. 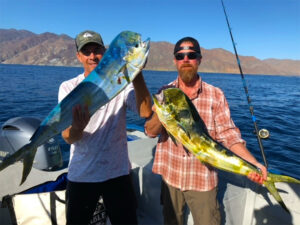 Scott Bolt, along with his fishing buddy, also got into some nice do-do action fishing within just a 10-minute boat ride north of the marina. Most of their fish came on Talas surface iron in the scrambled egg pattern.

To round out the month, SoCal residents, Desi Hauer and Justin Sharpe returned again to Isla Cedros, and this time brought along their friend, Allen Pineda, for whom it was his first visit to the Island.
Hauer reports, “We did a five-day trip arriving Tuesday 10/25 and departing 10/30. On Tuesday, we fished the on the first afternoon after landing and ended up with about a dozen yellowtail 15-35lbs. On Wednesday, we fished all day and started out by trolling for yellowtail. We hooked up and landed a few, and then started in on some bottom fishing for California sheephead and ended up limiting out on fish weighing between 5 and 25 pounds. We also took some more big slug yellowtail on a dropper loop and chunk bait as well.” 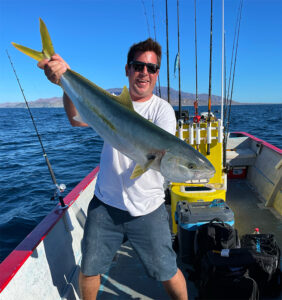 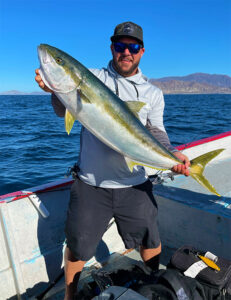 “Thursday was a little slower. We fished for yellows and ended up with about 6 total, but also hooked up a lot of Bonito, which put up a fun fight and gave us something to pull on. On Friday, we headed to Isla Natividad to fish the kelp beds for Calicos. If you had the right jig it was a wide-open bite. Red and orange Reebs plastics and Colt Snipers were incredibly effective, and we ended up catching and releasing over 80 fat calico bass.”

Hauer concluded his report by saying, “We also hooked a 70 to 80-pound black sea bass, which was the fish of a lifetime. Saturday before we departed, we decided to fish for yellows with irons only. We ended up with 6 yellowtail and about a dozen big bonito before 8:30 am.”

The fact of the matter is, we are now going into the month of November and the fish are still actively on the chew without showing much sign of slowing down at this point in time. The good news is, there is still a little time to get a piece of it before winter arrives.