As the 2022 fishing season on Cedros Island concludes, we can look back at the past several months of summer and fall and reflect back upon all of the fantastic fishing action that was enjoyed by visiting anglers, as well as the many smiles that were on their faces after enjoying the seemingly endless days of successful trips fishing the rich waters that surround the Island. 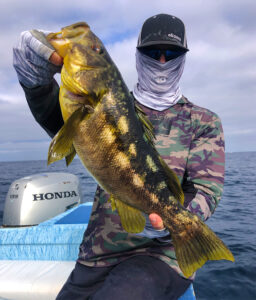 To properly top things off during our final week of 2022, we were paid a visit by Shea McIntee, host of the popular Fox Sports Network fishing show, Stoked on Fishing, along with his crew and a group of 23 anglers that were in his party. This was McIntee’s 9th year of bringing a group to fish Cedros Island, and this time he was accompanied by at least 7 anglers who had fished Cedros with him previously. 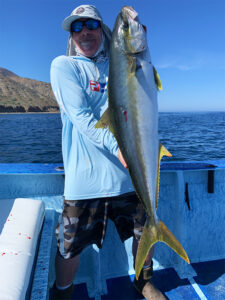 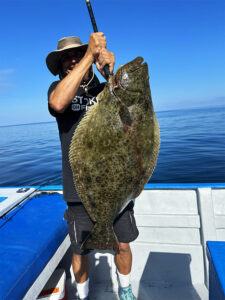 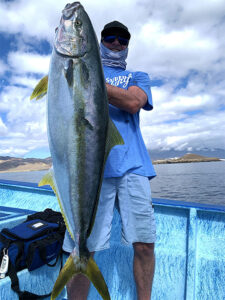 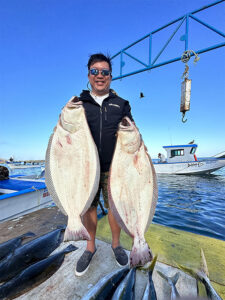 McIntee reported that his group did extremely well catching big yellowtail up to 40-pounds or more, although the anglers did not encounter as many dorado as had been available to anglers in previous weeks. Most of those hefty forktails inhaled slow-trolled mackerel, although a few of them were taken on the surface and bottom iron.

He indicated that they also did well catching and releasing fat calico bass up to 9-pounds than took a liking to surface iron in blue & white and speckled mint colors. A 60-pound black sea bass was also caught, which was immediately released.

Shea rounded out his comments by saying that they also managed to catch several quality-grade California halibut weighing well over 20-pounds. He said that a majority of the flatties were caught while drifting live mackerel over the sandy bottom on the leeward side of the Island.

Among the other anglers who visited the Island recently, Christofer Brown, who has been coming to Cedros to fish since 2011, brought his wife, Eva, along this time to join in the fun.

Eva, it should be mentioned, had never been saltwater fishing before, let alone at a place like Cedros Island, so he had to teach her to how to cast before they even boarded their panga. Brown said that they caught a number of big yellowtail as well as several chunky calico bass.

He indicated that while they were fishing for the calicos, they noticed that several of those fish were being targeted by large black seas bass that were snatching them away once they were hooked.  They even ended up catching a 50-pound black sea bass that ended up getting hooked itself while stealing one of the calico bass off their line.

Since both the Black sea bass and the calicos are customarily released to help preserve the resource of these slow-growing species, all of the fish involved in the feeding melee were returned to the water as shortly after they made it to the panga.

Cordell Meidinger paid his first visit to Cedros Island, along with his dad and fishing buddy, Robert Lavine. He reported that the three of them had a fantastic time catching a bevy of big yellowtail up to 30-pounds on slowly trolled live mackerel, as well as with deep-running Rapalas that were fished at a depth of around 30 feet.

Although there weren’t many dorado being caught while they were there, Meidinger said that they were still able to luck out with a 15-pound do-do that inhaled a MegaBait lure on their last day. 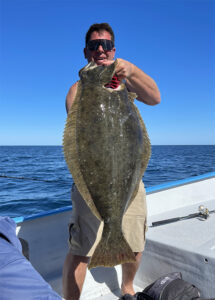 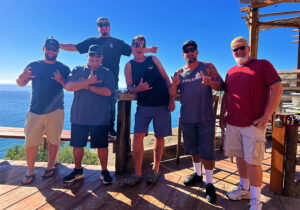 Rounding things out, Cedros veteran, Desi Hauer, and a group of 5 of his buddies, Justin Sharpe, Allen Pineda, Darren Rogers, Jesse Hallstead and Mike Jordan. All of the anglers are residents of southern California and did well catching yellowtail in the 20 to 40-pound class.

Hauer reported, “I came to Cedros this time with a total of six in our group. We flew out of TJ arriving around noon on Monday, and we headed straight to the pangas as soon we could. We had a good afternoon of trolling for yellows on Monday, and we ended up with 4 quality fish in just a few hours of fishing.

Tuesday, we fished the south side of the Island for more yellowtail and then around 11:00 we made our way to the northeast side. We successfully targeted halibut and ended up putting a few good-sized fish on the boat using live bait along with a bunch of miscellaneous bottom fish.

On Wednesday we shot over to Natividad. We caught and released some calico’s, but the most exciting part was a 40+ pound home guard caught by Justin Shape on a Reebs plastic lure in solid black. Thursday was pretty windy and a slow day of fishing.”

Hauer concluded by saying, “Overall, it was a great trip and we can’t wait to do it again next year!”

One thing is certain. If you want to secure the very best dates for the 2023 fishing season, now is the time to do it.

The fact of the matter is, once the New Year arrives, anglers will be scrambling to reserve the prime spots on the calendar to ensure that they can be on the Island during the best times in regard to tidal swings and moon phases in order to enjoy maximum success once they finally arrive.