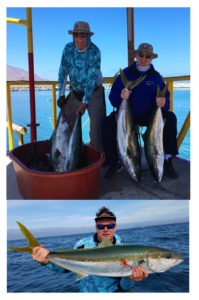 Once again, members of the Oceanside Senior Angler’s club descended upon Isla Cedros with a vengeance last week as USMC Vietnam Vet, Richard ‘Deek’ Takacs, 81, Korean War Vet, Ed Dennis, 83, were joined by a couple of other club members for 4 days of World Class yellowtail fishing.

Oceanside Senior Anglers puts on about 20 trips a year for their membership of over 280 anglers, and this time they decided to go all out with another classic adventure on Cedros Island.

During their stay, they racked up over 15 quality grade yellowtail up to 35 pounds. They also ran into a full-blown attack of big bonito that kept them busy in between. Most of the Yellowtail were taken on eggshell-colored bottom iron. Deek remarked that at times the surface was covered with red tuna crabs, and also confirmed reports from other visiting anglers that the massive schools of baitfish crashing the surface, “…sounded like rain.”

In other action around the Island, Rich Rose and his buddy, Chris Gwizdak, reported banner calico bass fishing, with the duo catching and releasing over 100 checkerboards a day between 3 and 7-pounds. They topped off their trip with limits of big yellowtail weighing over 28 pounds, which were taken on live mackerel.