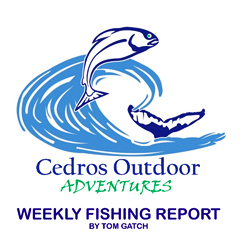 The Labor Day weekend has now come and gone after a fantastic month of fishing around Isla Cedros. The water continues to warm, and we are now beginning to see huge concentrations of red tuna crabs beginning to carpet the surface of the ocean around our regional islands.

Although they have not yet arrived in full force, dorado are once again beginning to show up in our fish counts, which often means that the yellowfin tuna are not far behind.

Nonetheless, when you are fishing near a place like Cedros Island, the proliferation of other prized gamefish species makes it difficult for visiting anglers to return to the dock without broad smiles on their faces.

Earlier last month, first-timers, Mike Hill, and his buddies Chris and Kevin, from Tucson, were amazed at the quality fishing for calico bass that exists around the Island. On one trip, they ended up catching and releasing nearly 70 fat checkerboards while tossing brown and red plastic swimbaits just a few miles south of the El Morro marina. The trio also ended up taking daily limits of big yellowtail between 18 to 30 pounds while trolling live mackerel.

San Diegans, Chris Ekdahl, and his brother Nicholas Ekdahl returned to Cedros Island for the 3rd time and each ended up catching over 100 fish during their 4-day trip. Chris indicated that they managed to take an incredible variety of species, which included over 100 calico bass, 17+ yellowtail, 60+ Pacific bonito, 20+ California sheephead, 7 ocean whitefish, 3 barracuda, 3 sand bass, and a large white seabass, along with a 28-pound halibut that inhaled a live mackerel on a dropped loop.

Ekdahl concluded his report by adding, “It was a great way to celebrate my 60th Birthday,  … one year late due to COVID.” 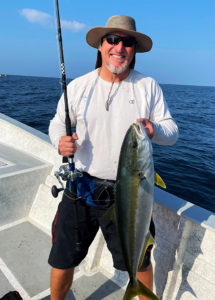 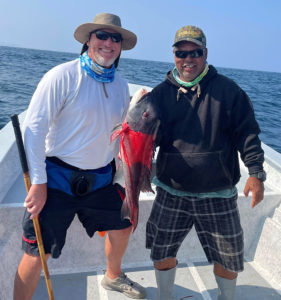 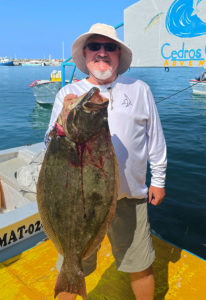 Shortly before the holiday weekend, Fernando Morales, his brother, Jesus Morales, and their buddy, Jonathan Jackson flew over to Isla Cedros and encountered some of the best saltwater fishing that they had ever experienced.

Fernando said, “It was a great trip for us. Shortly after we arrived, that afternoon and went out and I caught my personal best 40lb yellowtail. Later, the wind came up, we only managed 5 more.”

He added, “On the second day, we went out to the south end of the island by the salt farm and caught our limits of yellowtail by 10 am. Later, we went to the north side of the island looking for halibut, and we caught a few smaller fish.”

“The third day was windy, so we hit the kelp beds and caught some nice calico bass. Later in the afternoon, we went back out to the area by the salt farm and managed to catch limits of yellowtail.” 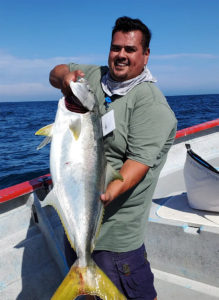 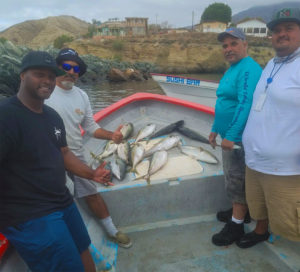 Morales concluded his report by saying, “On the fourth day we only had a couple of hours of fishing left before our flight, yet we still managed to catch 12 quality yellowtail in only 2 hours. It was definitely our best fishing trip to date …we had a blast!”

And so it goes, the counterclockwise spin of southern hurricanes continue to push the exotics, and the hoards of red tuna crabs that usually accompany them, northward into the range of our local pangas. The only thing that is missing, is you.