It is practically the middle of September and the Labor Day holiday has come and gone. The fishing action has been fast and furious until it was virtually halted for a few days with the coming of Tropical Storm, Kay, which swept up from the south bringing with it flurries of rain and heavy winds until it quickly passed through.

Before this brief hiatus, however, the bite has been outstanding for a number of species that include a bounty of trophy-grade yellowtail weighing between 30 and 45-pounds, along with several fat California halibut.

As a matter of fact, over the past 6 weeks or so, the halibut just seem to be getting bigger and bigger as time goes by. Early on, most of the flatties were coming in at around 18 to 20 pounds. A few weeks later, the average fish was hovering around 30-pounds, and two weeks ago, a huge 40-pounder was landed by one of our visiting anglers. 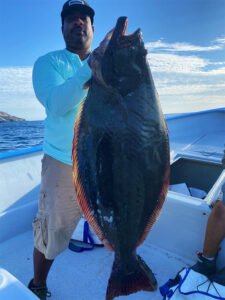 This past week, return angler, George B. from southern California, topped all of those catches when he hauled a monster 55-pound California halibut over the rail of his panga while fishing off the north end of the Island.

Fortunately, he was well armed for the battle, and offered, “I used a live mackerel on a 4/0 owner gorilla circle hook tied to a 4-foot dropper loop leader made with 50-pound Blackwater fluorocarbon on 80-pound braid fishing line. I borrowed a 6 ½ foot Seeker pole from the lodge and I used my Okuma Komodo fishing reel.” 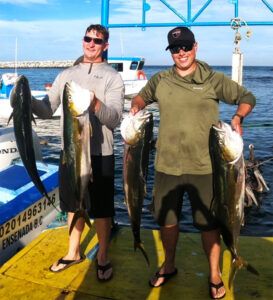 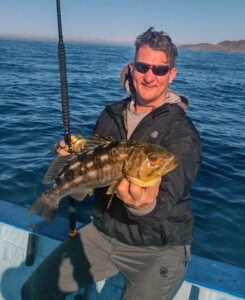 Not all visiting anglers to Cedros Island pursue their intended catch from a panga using a rod and reel, a few descend beneath the surface of the water with a speargun hoping to score a big fish. Reid Coultas was one of those when he came to the Island recently fully equipped to tackle either task.

Coultas reported, “One day we did not fish at all and hoped to dive again the next day, and we could only dive one day due to the pending storm system. I’m glad that we also brought all the of the equipment necessary to fish from the pangas as well.”

He concluded, “We ended up catching dozens of yellowtail, some California sheephead, and several calico bass using live bait and yo-yo iron.” 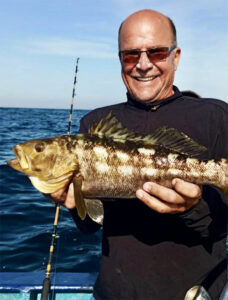 San Clemente resident, Shawn McClain, returned once again to Cedros Island, and this time brought along his friends, Stew Levey, from Boston, as well as Mike Luthi, Greg Daanan, and David Engels, from Wisconsin.

McClain said, “I was the only one with a previous experience fishing like this.  The rest of the crew all were first-timers using the irons and gear here on the west coast, and now they’re all hooked on coming back!

We fished the south the first day and should’ve had limits on yellows but came back with 6-8 on our 2 pangas along with some big calicos and Bonito.

I had a personal best with a 40-pounder here but had a shot yesterday at some 45-50+ yellows on the north side using mint surface irons but couldn’t get them to commit 100%.  Followed and we threw everything at them-just no takers!”

In conclusion, he commented, “They are a great group of buddies, and I’m looking forward to coming back with them again to fish Cedros Island!” 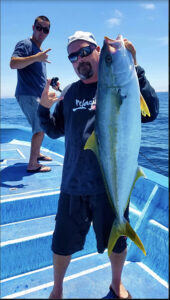 Charles Thompson, of BassRash Rods, is a veteran Cedros angler who, this time, also brought along his fishing buddies, Drew, Jett, Zuri, and Khoa.

Thompson reported, “We had an amazing, unstoppable surface iron bite for both yellowtail and Calico bass. Khoa and Zuri fished with Colt Snipers and experienced the same results. Once they got a taste of the fantastic fishing, they all told me that even my glowing description of the place before we booked our trip did not do it justice!

I have been here multiple times and this was the first trip for the others in my group.  There was an overwhelming consensus among the crew was, ‘…next year when we come’, and ‘

We can’t wait to get back here again.’ Kudos to Jose and his staff!” 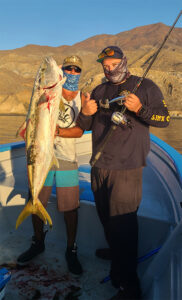 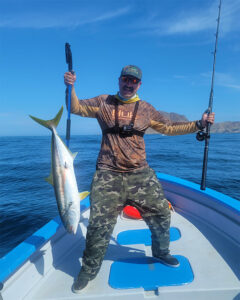 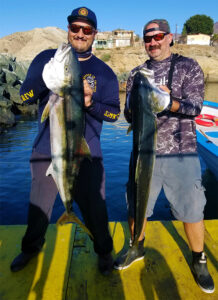 Rounding out this week’s report, visiting anglers, Eddieberto Medina, and his friends, Seth James, and Julian Garcia had their eyes opened by the fantastic fishing that they encountered when they paid an initial visit the Isla Cedros.

Medina commented, “This was our first time to Cedros island. Our trip was awesome, going through CBX was a breeze and I wouldn’t want to do any future trips any other way. We got to Cedros island and settled in prepping our gear by midday, and were out on the water shortly thereafter.

We were able to make bait, and then headed out of the harbor to the south side of the island. We trolled some Rapalas and then some live mackerel for a couple of big yellowtail and huge calicos. We then worked some birds diving that were on bait schools and were able to get a few more yellowtail on mint-colored surface irons before heading back in for dinner.

Unfortunately, the weather shut us down for the second day, but we did get taken out personally by Jose, and he took us out to some spots to try to fish from shore. That was something that I personally was grateful of him doing for us on his behalf and giving us the opportunity to explore a different side of the island instead of staying in one place.

On Sunday, after another delicious breakfast made by the staff, we made bait and headed south to the fishing grounds. We found some good-sized kelp patties and fished them to catch some big bonito and a few yellowtail. We then moved to the southwest side of the island and found it full of activity. We started slow trolling live mackerel and the yellowtail let loose. They were biting on both the live bait and surface iron.

In about an hour to an hour and a half, we had our limits of yellowtail by 10 AM. After scoring our limits of yellowtail, we decided to try our luck at some halibut fishing, we returned to the harbor to drop off our fish to get processed. We loaded up on bait and headed out to try for some halibut. We hooked up on a few, but unfortunately lost many of them before they could be landed.

On Monday morning, we went back out for a quick session of fishing before our flight took off. we decided to do some calico bass fishing. We decided to skip making bait and fish artificial lures. We went north and started fishing rocky structures along the shore and picked off a few nice calicos.”

Medina concluded his report by saying, “Our overall experience was amazing, and we all would like to thank everyone at Cedros Outdoor Adventures, including Big Mike who always kept us informed on what was going on and making sure you had everything you needed, the lodge staff with their delicious meals, and the dock crew for getting us to and from the water, and the excellent job processing our catch. Last but not least our Captain. Amidael gave us the best opportunity to be successful with his knowledge and experience. Trip of a lifetime and hopefully not our last. Highly recommend!”

It has been said that it is an “ill wind that blows no good”. Now that we are virtually into the Fall season, the chance of any more hurricanes and tropical storms has greatly diminished.

Nonetheless, Hurricane Kay managed to push a significant amount of water north from southern Baja, which traditionally brings with it a plethora of popular exotic gamesters like dorado, yellowfin tuna, and even wahoo. This phenomenon could bode well for anglers visiting Island in the future.

Tune in and find out next week!