As the weeks pass, the fishing action has begun adjusting to the seasonal changes and we are seeing a greater variety of species being taken by visiting anglers. Everything from big yellowtail to 40 pounds or more, huge white seabass, dorado, bonito, barracuda, and ocean whitefish, as well as a bounty of fat calico bass and a few sizeable black sea bass, which are both taken on a ‘catch & release” basis. 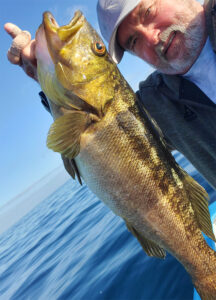 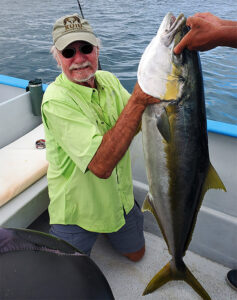 Nevada resident, and long-time Cedros veteran, Jim Bentley, Sr., was on his 9th trip to the Island, and this time brought along a group of other anglers, a few of which had never been to Isla Cedros before.

He was accompanied by his son, Lim Bentley, Jr., Adam Lehman, and a producer of YouTube fishing videos, Christopher Tom. During their trip, the senior Bentley did well on a variety of fish, which included countless chunky calico bass and a bevy of big yellowtail that was topped off by a big 41-pounder that he hooked while fishing with live bait. 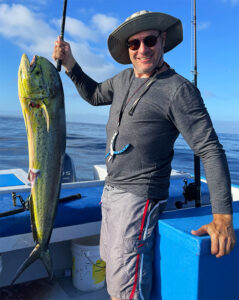 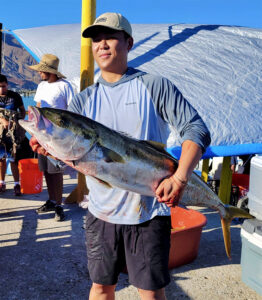 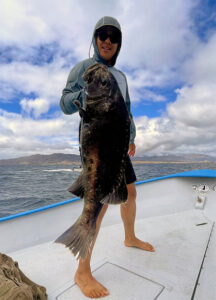 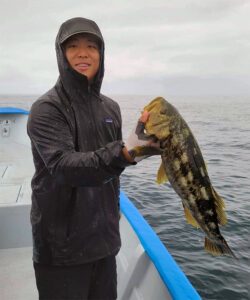 Another member of the Bentley party, Christopher Tom, from San Francisco, provided a few shots of the shots above, which included a sizable black sea bass that was released immediately after the photo was taken. Tom will also soon be posting video footage of their Cedros fishing adventure on his YouTube fishing channel ChrisFishingTV. This was Tom’s first trip to Cedros Island, and he was extremely impressed.

Tom commented, “We started our first by meeting our captain, Balam, of the panga Cabrilla, and began trolling north for Yellowtail. We ran three DTX Minnows and we were immediately hooked up within 10 minutes. After catching and releasing some smaller yellows, we yo-yo jigged Blue / White Salas Jigs and landed two yellowtails around 25#.

The second day was primarily live bait trolling, yielding 8 yellowtail on mackerel, with plenty of Bonita. Jim Bentley was put on the rail several times, fighting several 25#+ yellowtails all day.

On day three we continued trolling live bait, bringing 7 more into the boat, stopping occasionally to yo-yo for mixed species. Adam Lehman landed our largest yellowtail of the boat, at 31# on a live bait rig. Christopher Tom landed and released a 30-pound black sea bass while jigging a white/green flat fall.

Thursday was our most productive day. Live bait trolling has slowed, so we took the 30+ minute trip north to yo-yo. Our boat landed 6 more yellowtail that day. Christopher Tom landed 3 of his 4 yo-yoing within 15 minutes, the largest around 25#. Rough seas meant for great fishing before we returned to the lodge.”

He concluded his report by saying, “Finally, on our half day before boarding the plane home, we caught four more yellowtail and over 30 bonito, which we gave to our skipper to share with the lobster fishermen who were dropping pots on the first day of the season.

Our final half-day was highlighted when Jim Bentley, who was on his 8th trip to the Island, hooked and landed a 30-pound dorado while he was trolling a Rapala. Overall, our boat Cabrilla was extremely productive, with Balam putting us on the fish consistently. This was also Adam Lehman’s first time on the island. We all look forward to returning next year.” 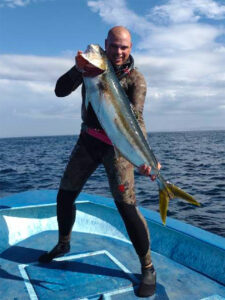 Also weighing in regarding his recent trip to Cedros, Anthony Katkov offered a glowing report of his experience.

Katkov remarked, “Friday, September 2nd, was a day to remember with Cedros Outdoor Adventures at the Baja Magic Lodge on Cedros Island.

Just a few hours after crossing the border, boarding a plane and arriving in Cedros; with no time wasted my two friends and I were already aboard the Sea Hunter headed straight for fishing grounds.

With good friends beside me and our dutiful captain navigating the panga, I could feel what awaited us in the magical waters of Baja. In less than an hour, our captain had us on a reef full of yellowtail just south of the salt grounds, in what was approximately 65 feet of water. The only problem was that the yellowtail were not hungry, and they wouldn’t touch either the live bait or iron jigs that we were offering them with our rods and reels.

Luckily, my friend Reid and I decided to suit up in our wetsuits, put on our fins, and grab our spearguns so that we could jump into the blue abyss and do some spearfishing. The first couple dives were like being in another world. The water was crystal clear, and warm and we both immediately saw schools of yellowtail in the 15 to 25-pound class in the middle of the water column.

The second dive I took I dropped a little past 30 feet. To the side of me I could see the smaller yellowtail mentioned previously, but beneath me was where the behemoths stayed.

As they say, ‘the third time’s the charm’. Fully relaxed yet anxious, I took one last breath on the surface, cleared my mind, closed my eyes, and dove vertically to 53 feet. Once I opened my eyes, I was surrounded by 35 to 50-pound yellowtail on all sides.

Trying to keep calm I picked the largest yellow I could see in the school. I followed him with my eyes, lined up my speargun, and pulled the trigger. FISH ON! I hit the yellowtail dead center and he instantly headed straight for the bottom, ripping line out of my reel as he swam.

I was out of breath and headed for the surface. The reel on my speargun screamed as I tried to put pressure on the fish. He was so powerful he kept pulling me underwater multiple times. We fought each other for what felt like hours. An exchange of me trying to gain back line while the yellowtail took runs pulling me under.

Finally, I had him tired out and in my sight. Worried of losing what is surely my largest yellowtail to date the second his color was close I let go of my speargun and grabbed him with both arms.

The yellowtail was so large I had to pin him between both of my legs before securing him by grabbing his gills. With him thrashing around I immediately took out my knife and dispatched him as fast as possible. It took three stabs to the head followed by bleeding the gills.”

He concluded by saying, “There was an odd calm following the fight. The yellowtail stopped moving and it all felt like a dream. As I swam over to the panga and handed the fish to our captain. The experience still hadn’t set in. Once I was on the panga holding the yellowtail in front of me on the bow, it hit me. A wave of excitement, gratitude, and fulfillment.

Without a doubt, it was a day to remember on Cedros Island.”

After such an impressive testimonial, one thing seems certain; whether you decide to pursue the gamefish of your dreams above or below the surface of the water, Cedros Island is the perfect venue in which to do it!  Come and get ‘em while they’re still around.

← September 11, 2022 – CEDROS YELLOWTAIL AND FLATTIES ON FIRE!Testimonials →
Scroll To Top