So far, the summer and fall fishing seasons have been full of surprises. There has been a consistent onslaught of big, feisty yellowtail, many weighing over 40-pounds, inhaling everything from live mackerel to surface and bottom iron, as well as trolled Rapalas and other hard baits. We have also seen solid catches of big white seabass, dorado, California sheephead, and a bounty of fat calico bass.

However, the most impressive phenomenon this year has been the number of large halibut that have been taken by visiting anglers. Earlier in the season, the flatties being caught were in the 12 to 20-pound class, which are certainly of a respectable size for the species.

Nonetheless, during the past month, we have been seeing much bigger halibut coming over the rails of our pangas, the biggest of which tipped the scales at over 55-pounds. This is impressive, indeed, considering that the World Record for this species is just under 68-pounds.

Several of our visiting anglers, some of whom had never fished the Island before, discovered this first-hand when they tied into flatties that could easily qualify as the fish of a lifetime for any dedicated halibut angler.

It hasn’t been unusual for some pangas to return to the marina laden with the big fish, as was the case when all 3 anglers aboard one boat ended up posing on the dock with each of them holding a brace of big halibut weighing close to 40-pounds each; well over 200 pounds of halibut ‘on the hoof’.

San Diegan, Jason Sanderson, was on his first trip to Cedros and was amazed by the yellowtail action that he encountered when he first arrived but had no idea that within a few days he would also catch several California halibut in the 30 to 40-pound range as well. 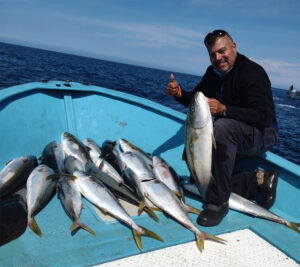 Hari Raja, also from San Diego, enjoyed catching a few of the big flatties on his first trip to Cedros Island, along with limits of yellowtail. 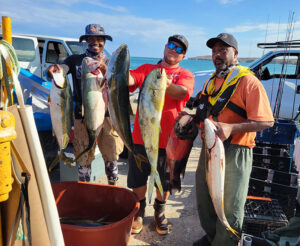 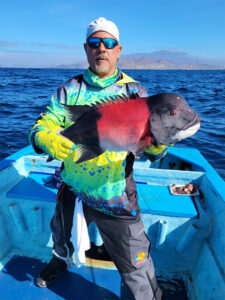 Anaheim resident, Eric Henderson, came to the Island with a party of 4, all of whom caught a variety of fish during their trip, including Henderson’s very first dorado, which weighed a little over 20-pounds. 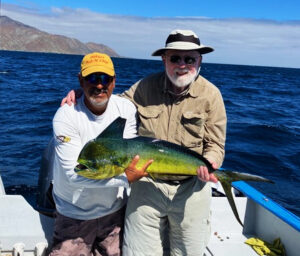 One of the best descriptions of the fishing experience available to the anglers who visit Cedros, however, was offered by Gerald La Baw, who had been to the Island 3 times before.

La Baw, reported, ““When everyone is catching fish, it’s easy to say complimentary things.  But when the fishing gets tough, and that can happen anywhere, as it did for my brother and I, and you know what … both of us can’t wait to come next year.

This was my fourth trip to Cedros and the first time I did not get a limit of yellowtail each day I fished.  In fact, if we hadn’t run into a good bunch of dorado, we would have not been able to take home hardly any fish.  But as it turned out we had about 30 pounds of fish fillets to present to my wife.

Going to Cedros Outdoor Adventures is more than fish.  Each time, I am greeted by extraordinary people all trying their best to make me feel welcome, be comfortable and well fed.

My brother and I came the week after the hurricane passed over Cedros.  We had some pretty windy days that limited where we could fish.  On the first day, the afternoon we arrived, we fished in front of the airport runway and my brother caught a nice yellowtail, that a seal, took a small bite out of.

But after that we couldn’t get past the bonito to hook up yellows.  We caught bonito by the score. Later that day I caught a nice dorado.  Both fish were caught pulling large Rapalas.

The next morning, we started in the same place and again found bonito.  We were trolling live bait.  In the afternoon we moved to the eastern side of the island and we went north about an hour where there were reports of dorado.

My brother, as usual, showed me who was the better fisherman and caught three nice fish, I caught one … small. On the second full day we returned to where we had caught the dorado and found a few more. I caught one throwing a mint and white sniper. The rest were caught pulling live bait.

We requested Diego as our pangero because he was so much fun when I was there last year and always did his best to put us on the fish.  Right after the hurricane most of the other boats were having about the same amount of action as we were.”

La Baw concluded his comments by saying, “Each evening we would have great time at dinner sharing stories and laughing at the crazy things that always happen on fishing trips.  Our group was friendly and we all seemed to enjoy each other’s company.  The temperature was the best I have ever experienced in the 70’s and low 80’s.

My brother and I both look forward coming back again to next year!”

The fact remains that, this late in the season, almost any species could be the star next week for visiting anglers. More big halibut? dorado? Perhaps even a few wahoo by the end of October?

We’ll just have to wait and see.