The 2022 summer season is just getting into full swing, yet the prevailing conditions are already producing exceptional catches of fat yellowtail and trophy-grade calico bass for Cedros Island Outdoor Adventures and their guests.

The acceleration of the hot, summer fishing action around Cedros Island continues to put smiles on the faces of visiting anglers, some of whom have never been to the Island before.

While many seasoned veterans know what to expect when fishing the waters surrounding Cedros Island this time of year, it is always entertaining to see the looks of amazement on the faces of first-timers when they suddenly realize the size and volume of fish that they can expect to catch during their Cedros fishing adventure.

The action really started to kick into a higher gear during July, as warming water temperatures put a variety of popular gamesters into a feeding frame of mind.

Damon Robinson and his dad, Rich, from San Diego visited in the middle of the month with a party of 11 anglers. It was the 6th trip to Cedros for the elder Robinson, who has consistently been lured back by the world-class fishing action that the waters around the Island offer visiting anglers.

The group took limits of yellowtail between 25 to 36 pounds, most of which attacked mackerel patterned Rapalas or surface iron in either a blue & white or scrambled egg pattern.

They also managed to land a 22-pound black sea bass, and on another day caught and released numerous calico bass in the 8 to 10-pound class that displayed a voracious appetite for well-presented plastics in orange and red combinations. 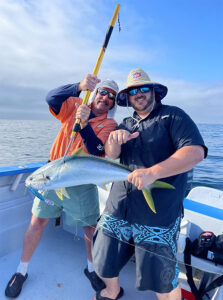 First-timer, Rick Hewitt, his buddy, Kiko, and a couple of other passengers from the Pagosa Company, in Fallbrook, California stocked up on limits of feisty yellowtail up to 42 pounds during their July visit. Most of the forktails they caught inhaled Rapalas in the blue mackerel pattern.

The crew also caught several halibut off the eastern side of the Island while fishing over the sandy bottom with live mackerel that they had taken on their Sabiki rigs earlier. The largest of the flatties tipped the scales at just over 20 pounds. One of the anglers, Yale Espoy even landed a black sea bass weighing 22 pounds while fishing with the live bait.

Hewitt commented, “The fishing on this trip was epic, and we limited out every day on quality-grade yellowtail. The Cedro’s gang was awesome! The captains were great and took us anywhere we wanted to go.”

He finished his report by saying, “We even landed a 42-pound yellowtail, but unfortunately, I don’t have a picture.” 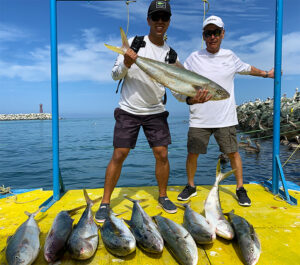 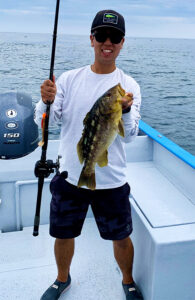 Chris Guerra and his fishing buddy, Gary Chow, from the Los Angeles area did exceptionally well on the yellowtail and enjoyed limit-style fishing during the several days that they were on the Island. They also took advantage of the excellent calico bass fishing that Cedros Island is noted for.

Guerra reports, “This was my 2nd trip to Cedros Island and it did not disappoint! On the first day here, we were already fishing for Yellowtail within a couple of hours of arriving, and after that, we finished off the day with Calico Bass.

The next day we limited out on Yellowtail within about 90 minutes while trolling and throwing irons. Later in the day we looked around for Calico Bass and in the afternoon, came upon a boil of Calicos feeding on Red Crab. For an hour straight it was Calico Bass on just about every cast. The key, however, was a lead head jig with red or orange, or swim baits in the same colors.

The next day was a repeat of the same with Yellowtail in the morning and a run to Isla Natividad, where the Calicos were biting all throughout the kelp! That day ended with me catching and releasing an 8-pound black sea bass.

Guerra concluded by saying, “Our final day saw us run into a boil of Yellowtail in the morning and landing 6 in the span of about 1 hour. Overall, it was an excellent trip and the Cedros crew and staff did a phenomenal job. I will definitely be coming back next summer!”

Also checking in, Casey Sharp and his dad, Colin, from San Diego were on their first trip to Cedros and happily reported ongoing catches of yellowtail in the 15 to 30-pound class on mint & white-colored surface iron.

The duo topped off their trip when they tried dropping the same iron down to the bottom to probe for even bigger yellowtail and were amazed when instead, the lure was inhaled by an 80-pound black sea bass.

It is easy to see why the 2022 summer fishing season is going so well despite the fact that it is quite early, and we see conditions improving exponentially as the air and water temperatures continue to warm in the months to come. After all, when you are visiting Cedros Island, it is not just about the great fishing; it’s also about the memories! 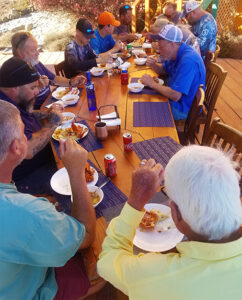