There is such a wide variety of fish that are available to the anglers who visit Isla Cedros that it is occasionally hard to focus on alternate target species because of the Island’s international recognition as an epicenter for world class yellowtail and trophy calico bass fishing.

Yet, despite the throngs of anglers who come to catch one or both of those species, there are still plenty of folks that arrive with a desire for variety. Carlylise Cave was one of those, and he did not leave disappointed.

Cave reports, “My goal each day was to catch as many different types of fish as possible. My boat ended up taking a full array of fish; from whitefish, calico bass, sculpin, yellowtail, pinto bass, bonito, red rockcod, and even a black sea bass and a nice sheepshead.” 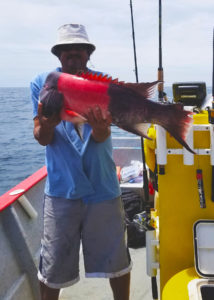 In other action, Richard Hibbard and his party did well on yellowtail up to 30 pounds, and flew out with a cooler full of fillets for the barbeque. 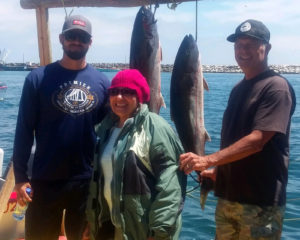 Calico king, Fred Knlins, returned with his buddy, Grant Noble, and cleaned up on the big calicos over the 6 days they were fishing Cedros. Most of the fat checkerboards inhaled 7” MC Swimbaits. They also took 22 yellowtail, topped off by Fred’s 30-pounder.

John Gilkerson was on his 5th trip to Cedros with a party of 11 anglers, 5 of whom had never been there before. He reported that the group did well on the yellowtail between 16 and 52 pounds, as well as on calico bass up to 10 pounds, which were taken on plastics and spinnerbaits. He also mentioned that fellow anglers, Sam and Debbie, who had never fished in saltwater before, were amazed at the skill of their panga captain, who could consistently tell them the type of fish they had just hooked, “…simply by the way it was fighting.”