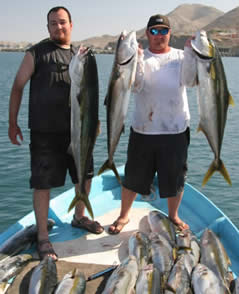 A lot of our clients have posted fishing reports on forums like Bloody Decks and Sr. Tuna and in publications like Western Outdoor News and other places. To see links to recent reports go here.

Had an awesome time. This trip should be on everyone’s bucket list. No matter how many times you may have already fished Cedros from the deck of a long ranger, you have never EXPERIENCED Cedros if you have not set foot on the island.
Brian Lewis, August 19-22, 2011

I have to say that this trip more than exceeded my expectations. I was taken back by being immersed in “old Mexico”. The people on the island are not hardend to the Americano’s and greet you as family, not as a tourist. The kids are all running around happy and there is absolutely no sense of fear that may be prevalent onthe main land. One thing that I focused on was the tortilla’s made with lard…. yummy. I forget who saw me but I was carrying a dozen tortillas in my pocket while we were fishing. I will definitely be back to Cedros (pronounced Sed-ross) Island next year. George Valenzuela / SenorTuna August 1-5, 2011 (note: George came back in 2012 and 2013… and already booking for 2014)

“If any of you want to go down on one of these trips, contact Jose. He did a great job setting the table for us. All you have to do is show up with your gear and beready to pull on lots of yellows, he takes care of everything else, shuttle, hotel reservations, panga reservations, everything”.  Taylor Pantel July 17-20, 2009 (note: Taylor has been back to fish with us every year since he wrote the comment above. Still loving Cedros!)

I have fished the entire west coast from Alaska to San Diego as well as many destinations in Baja. including the East Cape and the midriff islands and I will tell you as well as all of my friends that my experience traveling to and fishing isla de Cedros is by far one of the coolest things I have ever done. Never before have i met such wonderful,warm,friendly and lovable people. From the start I was treated like a family member and served like a king. I have already begun to plan my return visit your most spectacular, lovely island (what a find!). Thank-you again and again Jose.”  John Ortiz Nov. 2-5. 2009