The month of August has ushered in seasonal changes that have brought with them a welcome influx of more exotic gamefish species from southern waters.

A few anglers fishing around Isla Cedros back in late July reported seeing occasional dorado mixed in with schools of large yellowtail, but they remained boat-shy and unwilling to display any interest in lures or live bait. 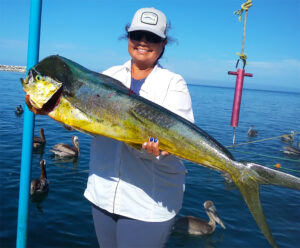 Finally, last week, Dima Firestine, who was on her first trip to the Island with her companions, Gary Fischer, and Karl Fischer, had a sweet, golden, 22-pound dorado come over the rail of the panga that the trio was fishing from.  During their visit, they also hooked up with a bountiful catch of feisty yellowtail in addition to a variety of other gamesters.

The first few weeks of August have offered some very good fishing for everything from fat yellowtail, big halibut, California sheephead, and even a few sizeable black sea bass. All of the visiting anglers have encountered excellent action out on the water, and have been offering rave reviews regarding the quality of their overall experience. 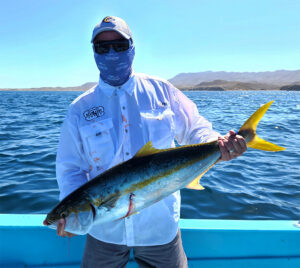 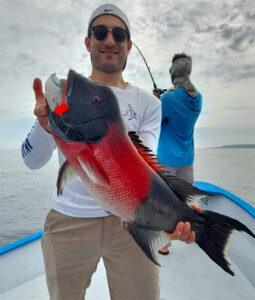 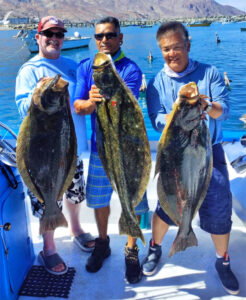 Joseph Smilanick commented, “I visited Cedros during the week of August 1 to 5 and was fishing with my brother, Paul, and Tony Rincon on the Fish & Chips, which was guided by Bush.

The fishing started out a little slow on Monday but improved as the week progressed. We found Bush to be a great guide, he was always energetic and in a good mood, and he really knew where to find the fish.

We caught a large number of quality yellowtail from the shallower areas just west of the salt works and then in an area toward the northwest. Later on, we ended up catching 2 hefty 25-pound halibut while fishing with live bait on the east side of the island.

We started catching yellowtail after following Bush’s advice to begin fast trolling our deep diving Nomad DTX plugs, and also by slow trolling live bait and fly lining live bait on a drift. However, most of the fish were caught by casting medium-sized jigs like Coltsnipers, Sumos, and Tadys, or plugs. One of the most effective ones was the Yozuri Salt Pro Minnow Bullet 15 FS.”

Smilanick concluded his report by saying “On our last morning I landed five yellowtail in less than 90 minutes while casting metal jigs and using a fast retrieve using spinning gear. It was a fantastic trip!” 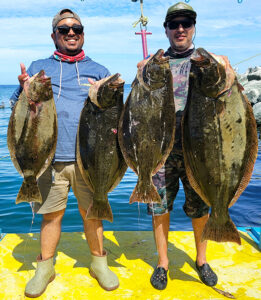 During the past few weeks, the fishing for California halibut along the sandy bottom off the eastern side of the Island has been off the charts. Daniel Hernandez and his party of 7 anglers not only encountered great fishing for limits of yellowtail up to 40-pounds, they also loaded up on sizeable flatties, one of which was his very first, weighing up to over 30-pounds.

Hernandez reports, “We had a consistent Yellowtail bite on this trip, so that’s where most of our fishing effort was focused.  But, after reaching our limits each day, we would then start fishing for halibut, since they have been biting well recently.

We didn’t get a chance to target Calicos in our 3 days of fishing, but we still pulled some up in the areas we were in. The Halibut all came on live bait, but we had quite a few lost because of short bites. There are definitely some big halibut out there right now.

Hernandez concluded by saying, “Our group included me, Joey Paz, Eric Hernandez, Frank Hernandez, Shawn Sharp, Armando Garcia, and Alex Soto, and we all had a great time.” 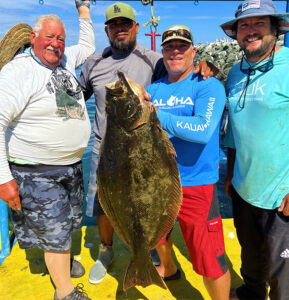 Also scoring bigtime on the halibut, SoCal resident, Brent Danna, and his party enjoyed excellent action catching fat yellowtail, big calico bass on the iron, and halibut up to 35-pounds on live bait.

Danna offered, “On the second day, we took limits of yellowtail to 35-pounds on purple Rapalas and 4 big halibut, the largest of which was 35 pounds, while we were fishing with live bait.

The wind was up in the middle of the week, but we still managed to scratch up a decent amount of Yellowtail in the morning and another 4 halibut up to 35-pounds in the afternoon.

Danna finished off by saying, “On the final morning just before our flight left, the water was glassy we all got to have some fun with a little ‘run and gun’ action using surface iron to top off our trip.” 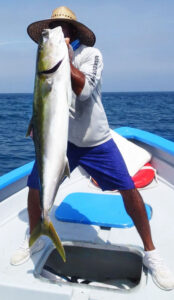 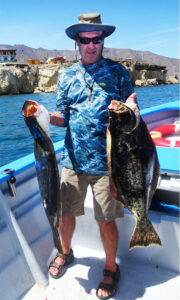 Clark Valentine, and his fishing buddy, Jack Dougherty, paid their first trip to Cedros Island and were both delighted to catch a few ‘fish of a lifetime’ while plying the fish-rich waters that surround it. Both of them are now looking forward to another trip to the Island next season to build on their past success.

It has been an outstanding month so far, but things are bound to get even better as the weeks go by. As a matter of fact, a local spearfisherman diving for yellowtail recently reported seeing a wahoo breeze through the school of forktails that he was descending upon.

Will they be the next species of popular gamefish scheduled to reach the waters around Cedros? Only time will tell.