As we slowly move toward the conclusion of the 2022 fishing season on Islas Cedros, it is becoming apparent that a seasonal change is on the way. Although daytime temperatures are still hovering between the low and high 70s, partly cloudy days are becoming more and more common as the week pass. Occasionally windy conditions are also more prevalent, which often limits the areas in which visiting anglers can comfortably fish. 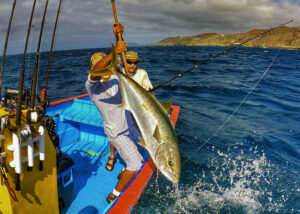 Nonetheless, packs of hungry fish are still on the prowl in the waters surrounding the Island. Particularly dominant are the abundance of feisty yellowtail that weigh out anywhere between 12 and 40 pounds, with the larger fish generally eclipsing the number of smaller forktails that are being brought over the rails of our pangas.  This year, big dorado have also become more common than in previous years.

The Magic Lodge at Cedros Outdoor Adventures was designed to accommodate serious saltwater anglers with a passion for hooking and landing trophy-sized gamefish, and the entire operation is geared to consistently accomplish that goal.

The day starts early at 5:00 am when the breakfast bell rings and anglers begin to fortify themselves for a full day on the water, they also have a variety of choices for the packed lunch that will accommodate them while they are out on their respective pangas. When the fishing is hot around mid-day, many can be seen holding a fishing rod in one hand, and a sandwich or burrito in the other.

After heading back to the marina at the end of the day, the angler’s fish are immediately cleaned at the dock and are then sent off to be vacuum-packed and promptly frozen to preserve the quality of the catch.

A cold beverage and some spirited conversation is generally on tap shortly thereafter when the anglers return to the Magic Lodge and eagerly await the dinner bell. After which, they prepare themselves and their equipment for the next morning, when it is time to do it all again. 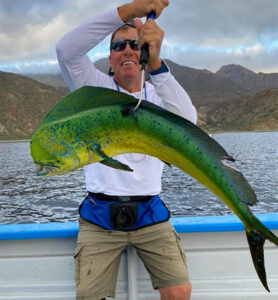 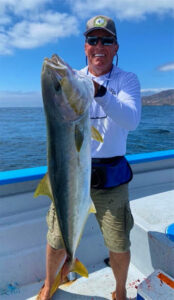 This past week, San Clemente resident, Doug Bauder, and a couple of fishing buddies, Steve Jersey, and Rick Brantly, paid another visit to Cedros Island and ended up catching a bevy of dorado and big yellowtail, along with a host of other species like California halibut and sheephead.

Also enjoying the hot action were long-time Cedros veterans, Erik Nevers, and his uncle, Dean Smoyer, who has been fishing Baja since he was a teenager in the 1960s. Nevers has been a long-term client of COA for nearly a decade and has been to the Island about 15 times during that period. During this visit, the duo managed to catch so many fat forktails that it was difficult to keep count. They also took their share of dorado and other incidental species in the process.

One of the most gratifying experiences, however, was likely enjoyed by Los Angeles resident, Ruben Sesia, who had never caught either a yellowtail or dorado before, let alone ever having been to Cedros Island previously. He was convinced to give it a try by his cousin, former L.A. resident, Tito Camacho, who had been to the Island before and thought that his cousin, Ruben, would have his eyes opened by the experience. Needless to say, he did.

On the first morning, Sesia hooked into a bull dorado weighing about 25-pounds that gave him everything he could handle. After the fish had been gaffed, he got his first view of the flashing gold, green, and turquoise display of colors that a dorado emits shortly after being landed. The next day, he hooked and landed a huge yellowtail weighing close to 40-pounds that really pinned him to the rail of his panga before he could get it under control. 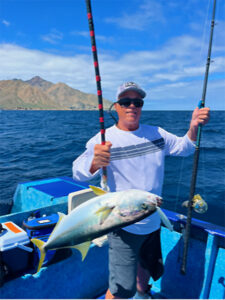 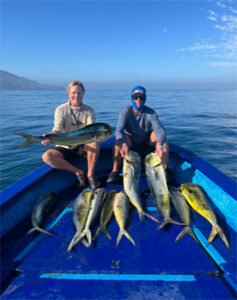 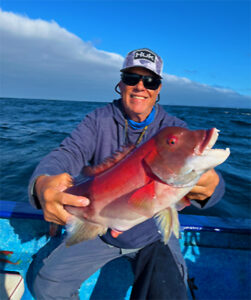 The previous week, another first-time visitor, Glen Fromang, also caught his first yellowtail and dorado while trolling live bait. During the trip, he also caught California sheephead and a number of other species. 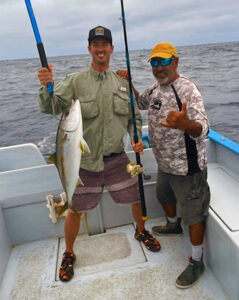 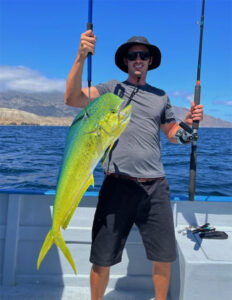 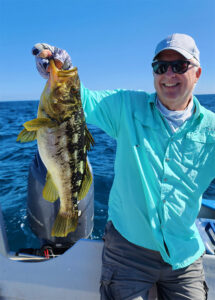 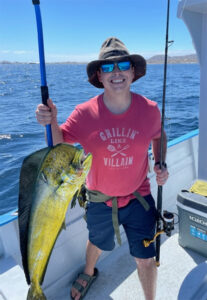 Also, present that week, attorney Greg Anderson from Arcadia came to Cedros Island for the first time along with his son, Phil Anderson from San Diego, and SIL Paul Villanueva, from Denver, Colorado.

The senior Anderson reported, “ This was our first trip to Cedros and we will definitely go again.  The trip and stay with Cedros Outdoor Adventures on the Island were excellent in every respect.  Several of the other fishermen that flew down to Cedros Island with us go every year.

The first afternoon after flying in. SIL Paul had the big fish for the trip with about a 30-pound yellowtail.  Several anglers, myself included, hung big yellows that ultimately broke us off on 40 to 60-pound mono. I now know to take two rigs in this class, one for bait and one heavy pound test for iron so as to not be under-gunned.  Inshore, I recommend medium to heavy baitcasting rigs, which are perfect for calicos. Most of our yellowtail and dorado were in the 12 to 15-pound class.

The calico bass we hooked were randomly caught while we were fishing in open water for yellowtail.  The calico weighed up to about 6 pounds but were immediately released after a photo was taken.

Anderson concluded his comments by saying, “I have fished San Diego long range since I was 14, and Mexico land-based also.  Cedros panga fishing is a totally different experience and very enjoyable.

We had no trouble making live bait every morning in the harbor and never ran out all day. A primary difference between this and a long-range boat trip is being land-based after fishing all day and sleeping in a bed rather than a bunk.  The food was outstanding, and the service was great!

I highly recommend Cedros Outdoor Adventures and look forward to our next trip.”

There are only a few weeks left in the 2022 season, so now is the time to make your reservations for prime dates in 2023 while they are still available.