The seasonal arrival of dorado to the waters surrounding Isla Cedros is eagerly anticipated by the visiting anglers who come to the Island during the weeks between late summer and the end of fall. When hooked, their flashing golden bodies with brilliant hues of green and turquoise are a source of delight for those lucky enough to have one secured to the terminal end of the line on the fishing pole they are holding.

This year, the dorado have not disappointed us so far, and as a matter of fact, have been biting with increased vigor as the weeks have passed. Unlike most of the slow-growing species in our inshore waters such as calico bass and larger groupers, which are customarily released immediately after a photo has been taken, the dorado is highly sustainable because it is the fastest growing fish in the sea.

Under proper conditions, dorado have been known to grow as much as 1.5 to almost 3 inches per week. In a single year, they can grow as long as four feet and weigh up to 40-pounds or more.  Although most of the fish we have been taking lately have not been quite that big, we are still seeing a good number of them coming over the rails of our pangas. 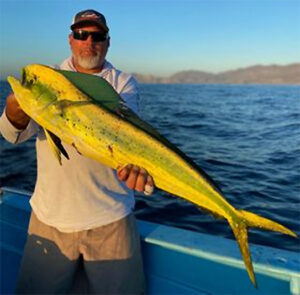 One of the groups that regularly pays us a visit this time of year is the annual Jeff Long Memorial trip, which has been conducted for the 5 years by Noli Yan out of Huntington Beach.

This year, a total of 12 anglers participated, some were on Cedros for the first time while those who had been there before were looking forward to watching the newbies as they experienced of the best saltwater fishing that they had likely ever encountered before.

After the trip, Noli Yan offered up a few comments regarding this year’s visit. He reported, “We just got back from our annual Jeff Long Memorial trip to Cedros Island. This was my first time using my CBX when crossing over to the Tijuana airport, and the entire process went very smoothly.” 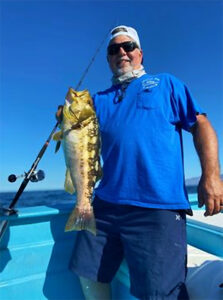 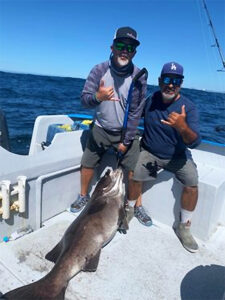 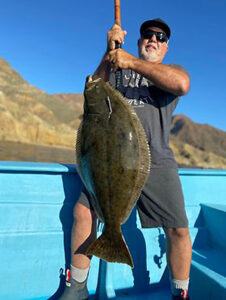 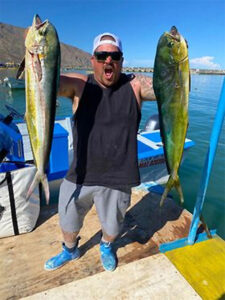 Yan continued, “The fishing was absolutely spectacular! Many of the anglers ended up taking their personal best of one species or another. We caught several black seabass and enjoyed outstanding action and a few 100-fish days hooking big calico bass, all of which were released. 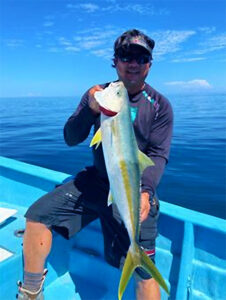 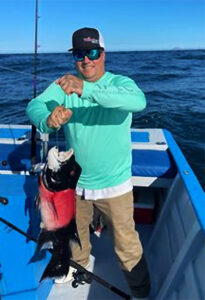 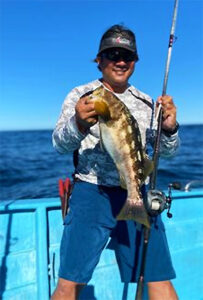 We also caught a lot of quality yellowtail, dorado, halibut, and California sheephead; all the while trying to navigate our baits and lures through the huge biomass of Pacific bonito that were usually circling around in the water beneath our pangas.  We even caught a mako shark while we were trolling for dorado.

He concluded by saying, “We topped things off one day with a little inshore fishing close to shore and ended up catching a lot of sand bass, spotted bay bass, and sargo, along with several trophy-sized yellowfin croaker.”

Michael Hurst, who was also along on this year’s trip out of Huntington Beach, added, “We had an absolutely awesome trip! Great weather, and even better fishing. We caught a bunch of nice dorado and feisty yellowtail, along with a few big halibut, sheephead, chunky calico bass, and even a massive Black Sea bass. What more could you ask for?” 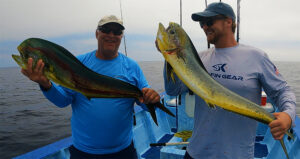 Rounding out this week’s report, Matt Osman from Dana Point flew down with 3 other anglers to get their first taste of Cedros-style fishing. He came with his dad, Chris, and another father and son team that was comprised of Ron Bain and his son, Dillon.

Osman reported, “We enjoyed a lot of great fishing, delicious food, and some fantastic weather. We could ask for nothing more. We are all neighbors in Dana Point, and we grew up fishing together. We had some killer dorado fishing, and lots of big yellowtail on both blue and white yo-yo iron and the DTX 165 trolling minnow.

We also caught a few nice halibut using live bait, along with a 35-pound black sea bass, which we released. We all had a great time and look forward to coming back again!”

One thing is certain. Whether you have been here only once, or you are a seasoned veteran with several trips under your belt, once you have experienced the world-class fishing that is available around Cedros Island, you are likely to want to return again and again.